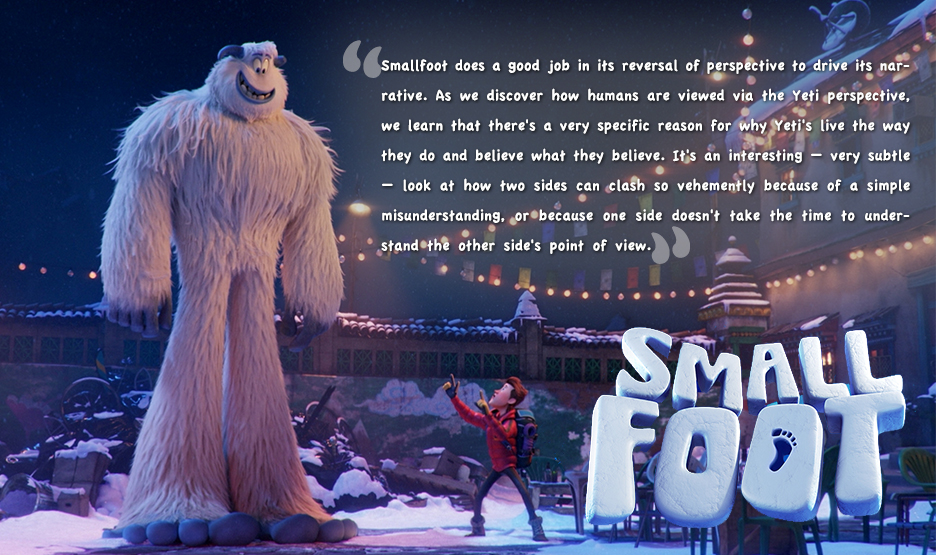 Pixar has dominated the animation stage for so long now, sometimes we forget there are other animation studios that have delivered some exceptional animated films as well (though the majority of them do tend to run their brands into the ground with too many unnecessary sequels and spinoffs). Sony Animation has produced several fun films, Dreamworks Animation has delivered a couple of standouts, and of course, we all know Disney Animation’s history. Then there’s Warner Brothers Animation, who, outside of their DC, LEGO and Hannah-Barbara brands, hasn’t delivered a whole lot in terms of winning products. So it was interesting to see them step out of their comfort zone once again (after 2016’s Storks, which did impress me quite a bit!) to produce a film that resembled something you might expect from a studio like Blue Sky. I can’t say that Smallfoot is full of laugh-out-loud moments, but it does have a strong, tender narrative that keeps it from sinking into the ice.

Smallfoot follows Migo (voiced by Channing Tatum), an aspiring gong ringer in a Yeti civilization situated on the top of a mountain hidden by a ring of clouds. This society is run by Stonekeeper (Common), an enlightened leader who wears a robe of stones that depict the Yeti’s complicated history (things like their creation being from the butt of a yak, or having to wake up the bright snail every morning to careen across the sky with its brilliant shine). According to the stones, the mountaintop sits on the backs of mammoths that need to be fed ice every day to keep from overheating, or else everything would collapse into the nothing.

These stories may be far-fetched, but nobody ever questions them, as the stones are never wrong. If you do question anything, you’re required to push it deep down and forget about it. In other words, this is the way of the world and unless you conform to that of the most powerful you will be forever banished from society. (Sounds eerily familiar in a lot of ways.)

One of the stones states directly that there is no such thing as a smallfoot, otherwise known as a human. So it’s a bit disconcerting to Migo when he actually sees a smallfoot after a practice run at the gong sends him to a secluded part of the mountain where he witnesses a plane crash. Migo’s torn because he’s a devout follower of the stones, but he knows what he saw and can’t help but question its existence. Until he’s ready to admit he never saw anything, he’s banished from his home. Enter the SES (Smallfoot exists, Suckers… er, I mean… well, I can’t remember what the actual name is; this one’s cooler anyway), a small band of free-thinkers who question everything about the stones, led by Stonekeeper’s daughter, Meechee (Zendaya).

They believe that Migo did in fact see something and wants to prove everyone wrong, so they team up to help him go below the clouds to find the evidence they need. Once down the mountain, Migo discovers a whole new world, including Percy (James Corden), a celebrity animal researcher who’s so desperate for ratings that he’s willing to make up the story of discovering a Yeti just to get back into the spotlight. Migo brings Percy back to his home to prove that smallfoots do exist and that what they once believed to be true may all crumble down around them. Will the truth be revealed? Will the two species find a way to co-exist? Will friendship and love blossom? If you’ve seen any kids movie in your lifetime, I’m sure you already know the answers to these questions.

But Smallfoot does a good job in its reversal of perspective to drive its narrative. As we discover how humans are viewed via the Yeti perspective, we learn that there’s a very specific reason for why Yeti’s live the way they do and believe what they believe. It’s an interesting — very subtle — look at how two sides can clash so vehemently because of a simple misunderstanding, or because one side doesn’t take the time to understand the other side’s point of view. We get so lost in our own ideology that we aren’t willing to apprehend what the other side is thinking, thus hatred and anger grow like wildfire, wherein, if we would simply listen and comprehend the differing point of view, we’d know that we’re much more similar than we appear on the surface.

Writers Karey Kirkpatrick and Clare Sera have a clear understanding of what they wanted to accomplish with the film and nothing ever seems disingenuous. The narrative is clean with some fun characters, especially Fleem (Eli Henry), who is all but a walking zinger, acting as this movie’s Sid from Ice Age. There’s no overt love story to get in the way of building the overall story and the world building is done well and makes sense throughout.

You probably wouldn’t know it by the trailers, but Smallfoot is also a pseudo-musical; I say pseudo because from my count, there are only four songs in the film, but each one is utilized to its fullest extent as explanations for the character’s motivations and why they believe what they do. They don’t get in the way, they don’t ever seem out of place, and they match well with the characters who sing them (Tatum singing an upbeat pop song; Common a dour rap). Because Smallfoot does everything right from a technical standpoint and leaves you feeling all warm and fuzzy inside, you don’t notice that some of the jokes fall flat because you’re so ingrained in the mystery of the Yeti and their discovery of two worlds waiting to be transformed for the better.

Hell Fest feels more like a 90-minute commercial for Knott’s Scary Farm than it does a horror movie as it follows a group of very pretty people around a traveling amusement park without developing them beyond their very basic, stock personalities (or providing any real scares). B

Kevin Hart and Tiffany Haddish do what they normally do in Night School, a film that squandered its potential with a weak script that glosses over some very important topics (such as learning disabilities) and never justifies the half-a-dozen different story arcs (or friendships) it tries to develop. B

Next week, new movies include A Star Is Born and Venom. If you would like to see a review for one of these, or any other film out next week, please respond in the comments below.

This entry was posted on September 30, 2018, 4:41 pm and is filed under Entertainment, Film, Movies, Reviews. You can follow any responses to this entry through RSS 2.0. You can leave a response, or trackback from your own site.