Movie Mayhem – The Spy Who Dumped Me 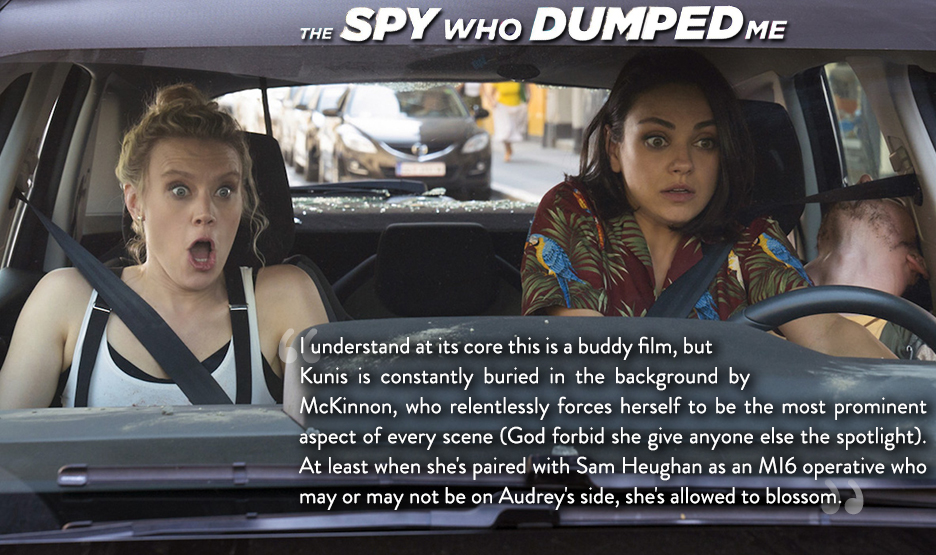 In small doses, Kate McKinnon can be very funny. On Saturday Night Live, for example, she has a knack for infusing characters with just enough manic energy and quirky characteristics that juxtapose perfectly with her straight-laced counterparts within the same sketch, and with her ability for perfectly-timed, over-the-top expressions, she can both make a sketch work from the beginning or bring life to an otherwise dying sketch. But this works best in four-minute bursts. It doesn’t work as well when she tries to extend this personality over the course of a two hour film. I have yet to see a movie featuring McKinnon where I didn’t find her overly aggressive, annoying and off-putting, mainly because it’s clear this type of extreme shtick is all she knows. This perception doesn’t change with her new film, The Spy Who Dumped Me, where she plays the hyperactive yin to Mila Kunis’s frazzled yang.

One year after first meeting Audrey (Kunis) at her birthday party, Drew (Justin Theroux), a spy for the CIA, dumps her via text message. Right out of the gate we get a sense of how the rest of the movie will play out — introducing a mix of sloppily written characters, forced humor, and decent action sequences — as we cut between Audrey and her best friend Morgan (McKinnon) celebrating her birthday and Drew fighting off and fleeing from a group of unknown assailants. When Morgan and Audrey send him a text telling him they are going to burn all of his stuff, Drew quickly returns to the states to retrieve  something in her possession that contains some very important information. Upon his return, Drew is shot and tasks Audrey with getting the information to someone in Vienna, tangling her and Morgan up in a spy game that neither are ready for.

I never bought the friendship between Audrey and Morgan because the chemistry between Kunis and McKinnon is weak at best, as both actors do what they do best despite what the other is doing at any given time. Kunis is great, fleshing Audrey out with just enough balance to keep her interesting. But she’s never alone in the movie. I understand at its core this is a buddy film, but Kunis is constantly buried in the background by McKinnon, who relentlessly forces herself to be the most prominent aspect of every scene (God forbid she give anyone else the spotlight). At least when she’s paired with Sam Heughan as an MI6 operative who may or may not be on Audrey’s side, she’s allowed to blossom.

A lot of this could be because Kunis doesn’t know how to exert herself enough, but it’s more likely due to the script, which spends more time setting up the next joke than telling a solid story. More often than not, characters tell us things about themselves or others, but we never get to see those aspects in the characters themselves. Within the first five minutes, we’re told Audrey is a terrible liar, but at no point do we ever see that side of her. Every time she’s put into a situation where she has to lie, director Susanna Fogel either cuts away from the scene or lying seems to come quite naturally to her. So, why highlight that aspect when it has no purpose in the script?

Characters are also given abilities only when it suits the current setup. At one point, the trio of heroes must infiltrate some sort of circus. When Morgan is tasked with hiding as a performer, she reveals she’s trained as a trapeze artist. It doesn’t help that the sequence that follows this sudden revelation has nothing to do with the story or the characters. The whole thing becomes nothing but a set piece dropped on us because Fogel and co-screenwriter David Iserson decided it would be fun to have a fight sequence on a trapeze.

The issues with the script don’t stop there, as it spends a lot of time on inappropriate and unnecessary bathroom jokes to mask the fact there isn’t much substance behind the film. Who needs to see a guy’s ball sack or some fat tourist have diarrhea? When filmmakers throw this type of stuff in for no other reason than “shock” value or because they feel infantile humor is necessary to get a laugh, it’s a clear indication that the filmmakers aren’t trying to be wise or clever or seek to provide anything of substance; they just want to throw something out there that will hopefully make money.

There are a few decent laughs sprinkled throughout the film, but the movie’s saving grace is the action sequences, which are all interesting and fun, the highlight being the car chase through the streets of Vienna. Not only does Fogel have an eye for capturing the thrill and excitement of the chase, this is one of the only moments that Kunis has a chance to shine above everyone and everything else, and her presence during the chase is magnetic, drawing you into the visceral atmosphere.

Following a week after the sixth Mission: Impossible film (a series that understands how to capture the true essence of a spy movie), The Spy Who Dumped Me proves why genre is nearly dead, as it fails to encompass much of anything that makes for a good spy movie, parody or not, including the intrigue behind which spies are good, which are bad and which are double agents. Instead, Fogel relies on McKinnon to save her, and though there are some comedians who can deliver a strong dramatic performance (Robin Williams and Steve Carell come to mind), McKinnon is not one of them. Whenever she tries to tone her wild-eyed energy back and show some true dramatic chops, her lack of ability shines bright, so banking on her and her brand of humor to carry the film is what ultimately sinks it.

Had The Darkest Minds come out during the height of Twilight and The Hunger Games, it probably would have been just another young adult movie based on a book, but as the genre itself decays into a shadow of its former self, the strong cast and a relatable story provides a light spark of hope in reigniting the genre. A-

Transitioning from middle school to high school can definitely be an awkward phase in anyone’s life, which is what makes Eighth Grade so pure, as the entire cast (especially the fantastic Elsie Fisher) make watching the film feel perfectly morose, mundane and of course, awkward. A-

Next week, new movies include The Meg, Dog Days and Slender Man. If you would like to see a review for one of these, or any other film out next week, please respond in the comments below.

This entry was posted on August 5, 2018, 5:00 pm and is filed under Entertainment, Film, Movies, Reviews. You can follow any responses to this entry through RSS 2.0. You can leave a response, or trackback from your own site.