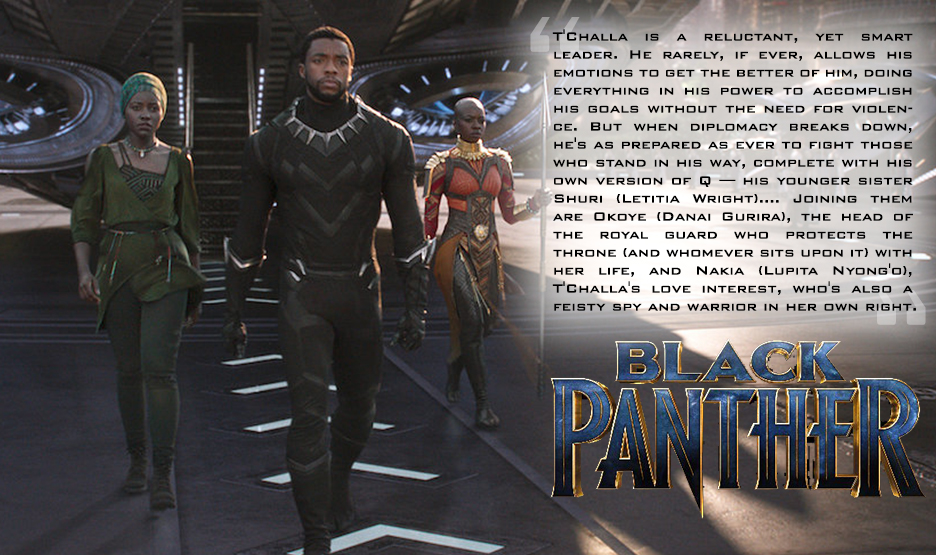 Bilbo Baggins, meet the man behind your nemisis, Gollum!

That’s what I kept thinking when CIA operative Everett Ross (Martin Freeman, first introduced in Captain America: Civil War) bags the nefarious Ulysses Klaue (Andy Serkis, last seen tormenting the Avengers in Avengers: Age of Ultron). This time around, Ross goes undercover to purchase an artifact made of Vibranium (the storngest metal in the world, found only in the African nation of Wakanda) to lure Klaue into the open. But what’s that lurking in the shadows? Why, it’s T’Challa (Chadwick Boseman), crowned king of Wakanda after the death of his father in a massive explosion at the U.N., who’s also out to stop Klaue once and for all. Both men want him for different reasons (Ross because he’s a federal criminal; T’Challa because he stole several pounds of Vibranium), and neither wants to give him up. What they don’t know is there’s a third player in the mix who also wants Klaue for his own purposes. Who will triumph?

Though this three-way dance for control over Klaue may seem insignificant on the surface, it turns out to be the linchpin that ignites and ties together all of the different plot points of Black Panther, Marvel’s newest entry into their unstoppable cinematic juggernaut. Taking place about a week after the events of Civil War, Marvel once again finds a way to hit all of the right notes in expanding on the world they’ve created and bring a new voice to the Marvel fold in director Ryan Cooglar, who, like every director before him, stays true to the overall Marvel brand while putting his own signature stamp on the project.

Returning home after teaming up with Steve Rogers to stop Tony Stark from keeping the Sokovia accords from falling apart, T’Challa has to go through a ritual in which the powers of his ancestors are stripped away in order to fight any challenger who wishes to fight him for the throne. He gains the respect of his pride (see what I did there) rather quickly and undergoes the process of regaining his powers, an interesting ritual that allows the possessor to walk among the ancestors, including his father, for advice and closure. What he doesn’t know is there’s another threat from the outside who will stop at nothing to rip the crown from T’Challa and claim it as his own so that he can lead Wakanda in a global takeover.

T’Challa is a reluctant, yet smart leader. He rarely, if ever, allows his emotions to get the better of him, doing everything in his power to accomplish his goals without the need for violence. But when diplomacy breaks down, he’s as prepared as ever to fight those who stand in his way, complete with his own version of Q — his younger sister Shuri (Letitia Wright), who runs the laboratory that develops all of the advanced tech from the Vibranium they mine beneath their hidden city. The pair is fun and convincing as a brother and sister team, one who sits in the pocket of calm and logic, the other that just wants to be part of the fight. Joining them are Okoye (Danai Gurira), the head of the royal guard who protects the throne (and whomever sits upon it) with her life, and Nakia (Lupita Nyong’o), T’Challa’s love interest, who’s also a feisty spy and warrior in her own right.

Everyone involved — which seems to include every high-caliber black actor working today, including a riveting Sterling K. Brown, the usual voice of reason Forest Whitaker, a stoic Angela Bassett, and an irresolute Daniel Kaluuya— is at the top of their game, especially Serkis, who drives his wild-man sensibilities to the extreme without sliding into a cartoon version of himself. It’s great to see Serkis in a role that isn’t covered by computer graphics, and it appears, so does he. He brings an excited whimsy to his role, which he carefully dovetails into a level of eccentricity and gusto that lightens up the film. There are many actors who’ve created villains you love to hate, but with Serkis, he convinces you to root for the villain, simply because you want to see more of him.

Speaking of that villain you love to hate — in Black Panther, that would be Erik Killmonger (Michael B. Jordan), who plays this resentful character as if he were in a prestige picture prime for Oscar gold. Nothing about his performance (outside of the mind-blowing technology, rhino horses, and comic-book lore) screams comic villain. He’s able to take what could have been an over-the-top caricature and grounds him with a heartbreaking weight that allows you to believe every word and move he makes. It’s an honest performance that balances out some of the more outrageous antics that in other films would keep you from believing this could take place in the real world.

What does go over-the-top — and rightfully so — are the action sequences. But because Cooglar chose to insert these top-notch, and in some cases, Oscar-nominated actors, into the action, it’s far easier to believe what’s happening. Which is where Cooglar’s idealism comes into play. He’s able to have fun with his toys, but send a message at the same time, one that will speak to many people, even if I did feel it was a little contradictory at times.

I wouldn’t say Black Panther is the best Marvel has ever produced, but when you have so many great films in the canon already, to sit on the same pedestal as all of those that came before and show you can not only play in the same sandbox, but hold your own against other heavyweights, that’s saying something. Boseman has played many real-life characters in his time in Hollywood, and as Civil War has proven before, Black Panther reiterates that he has many talents up his sleeve, and his low-key creation is a welcome addition to the universe that just keeps expanding for the better.

Though there are some fun moments throughout Early Man, I couldn’t help but feel I’ve seen it all before. There’s nothing wrong with characters, the plot, the animation or the voice-work, but there’s nothing new or surprising either. B

Next week, new movies include Game Night, Annihilation and Every Day. If you would like to see a review for one of these, or any other film out next week, please respond in the comments below.

This entry was posted on February 18, 2018, 8:34 pm and is filed under Entertainment, Film, Movies, Reviews. You can follow any responses to this entry through RSS 2.0. You can leave a response, or trackback from your own site.