Ever since they revolutionized animation with Toy Story — the very first fully computer-animated feature-length film — back in 1995, Pixar has been a pillar of creativity. With twenty-two years and nineteen movies under their belt (not counting shorts and spinoffs), they haven’t been perfect every time, but even their worst outing tends to be better than the majority of films that hit the multiplexes these days. Aside from pushing the boundaries on photo-realistic animation and their incredible consistency (kudos to keeping John Ratzenberger employed!), the one component that makes Pixar such a powerhouse in the animation world is their insistence on telling a good story above all else. To do this, they populate each and every story with strong characters and an amazing heart, allowing them to pull at your heartstrings like a master puppeteer. Not only that, but they aren’t afraid to take risks. A kids movie with an old man at its center? A space opera where two words take up the bulk of the dialogue? A tasty treat about rats in Paris? A colorful tale dealing with death and protecting your heritage? 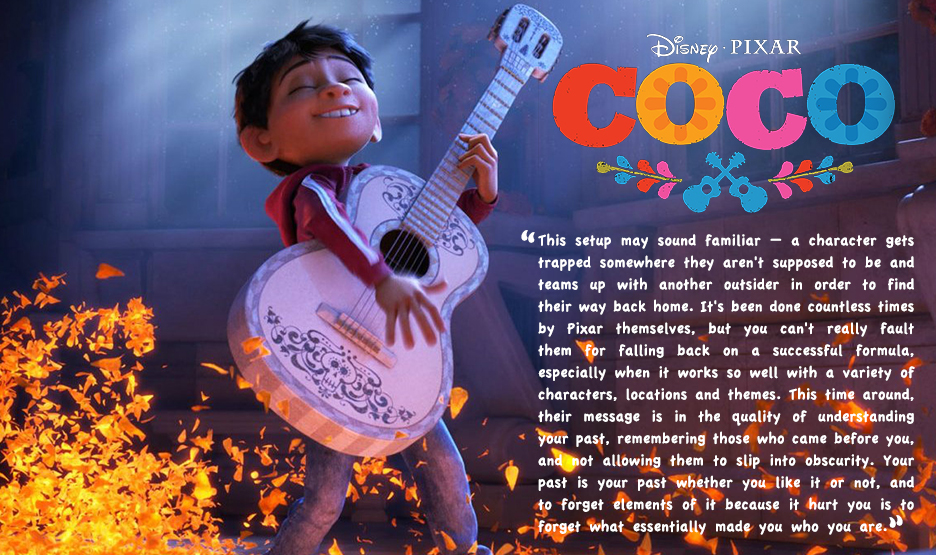 That last one refers to Coco, Pixar’s latest film inspired by the Mexican holiday of Dia de los Muertos, in which deceased relatives are able to return for one day each year to spend time with their families. The holiday has been captured in several films, most notably Twentieth Century Fox’s 2014 outing, The Book of Life. The film deals with a lot of the same ideas as Coco, but it didn’t do all that well at the box office, and I believe it was because they lacked key ingredients that Pixar was able to include in their interpretation of the holiday: sincerity and heart.

Right from the first frame, Pixar jumps directly into its central conflict. Miguel (voiced by Anthony Gonzalez) is a young boy living in a family with a long history of despising music after Miguel’s great-great grandfather abandoned his wife, Imelda (Alanna Ubach), and daughter, Coco (Ana Ofelia Murguía), to pursue fame. For three generations, the family has forbidden any music to touch their ears while building an empire in shoe-making. But Miguel is the black sheep of the family and wants nothing more than to play music and become a star like his hero, Ernesto de la Cruz (Benjamin Bratt). After discovering that Ernesto is actually his father, his desire to play intensifies, leading him to break into Ernesto’s mausoleum and “borrow” his guitar.

Now there are rules to the Land of the Dead:

1) Only those spirits whose family has placed a photo on the ofrenda (or alter for the dead) to welcome them home may cross the bridge to the living;

2) When the last living relative forgets you or passes on, you ultimately cease to exist; and

3) When you steal from the dead on this very sacred day, you are sent to the Land of the Dead where you must earn a blessing from one of your deceased relatives in order to return home.

After taking Ernesto’s guitar, Miguel immediately meets his past relatives, including Imelda, who isn’t at all happy to hear of his desire to play music. She agrees to give Miguel her blessing, but only if he agrees to stay away from music forever. He can’t do that, so he seeks the help of Héctor (Gael García Bernal), a wayward soul trying desperately to cross the bridge, to track down Ernesto so that he may gain his blessing to become a musician.

This setup may sound familiar — a character gets trapped somewhere they aren’t supposed to be and teams up with another outsider in order to find their way back home. It’s been done countless times by Pixar themselves, but you can’t really fault them for falling back on a successful formula, especially when it works so well with a variety of characters, locations and themes. This time around, their message is in the quality of understanding your past, remembering those who came before you, and not allowing them to slip into obscurity. Your past is your past whether you like it or not, and to forget elements of it because it hurt you is to forget what essentially made you who you are.

This message is one that everyone, especially in this current political atmosphere, should take to heart. Whether good, bad or ugly, history should never be forgotten or altered as that may lead to misconceptions that may ultimately hurt you and those that you love. Directors Lee Unkrich and Adrian Molina do a terrific job at encapsulating this idea in Miguel’s journey, adding layers upon layers to the story we’re told at the beginning as he learns more about his family’s past and what led them to where they are today. Are the people his family have all but banished from their memories as bad as they may seem, or are the secrets of the past hiding a better future for not only Miguel, but for the aging Coco as well?

Regardless of who you are, what your heritage is, how you were raised, your biases or prejudices, or political leanings, Coco is a film every family can and should enjoy. The visualizations are as brilliant as ever, the music is heartfelt, the characters are fun and engaging, and the story is universal. Everyone has either lost someone they loved, have had dreams and aspirations, have family members that push you to be someone you aren’t, or all of the above. These elements are told in a gentle, sincere way throughout the film and will no doubt leave you wanting to honor the past, honor your heritage and reach for the stars. But aside from all of that, nothing beats the heartwarming (and heartbreaking) climax involving Miguel and Coco in a scene that will leave even the strongest heart weeping like a little baby.

Next week, no major releases are scheduled, so if you’d like to see a review for a film I have yet to review, please respond in the comments below.

This entry was posted on November 26, 2017, 5:11 pm and is filed under Entertainment, Film, Movies, Reviews. You can follow any responses to this entry through RSS 2.0. You can leave a response, or trackback from your own site.