Feel-good movies always walk a fine line between inspirational and exaggerated  schmaltz. On one level, they present a rosy picture of the world, a near-utopia where nothing too terrible ever happens, and when it does, it’s resolved rather quickly, and on another level, they do everything they can to motivate you to be an overall better person, but try do so without sounding intentionally preachy. This mix often leads to over-the-top sentimentality, or pushes the film to become so unrealistic, you just can’t buy its sincerity. When done right, though, they leave you emotionally cleansed, joyous and hopeful for the future. With Wonder, the newest entry into the family-friendly inspirational drama based on the novel by R.J. Palacio, this line is extremely thin, yet expertly teeters on both sides without ever going too far one way or the other. 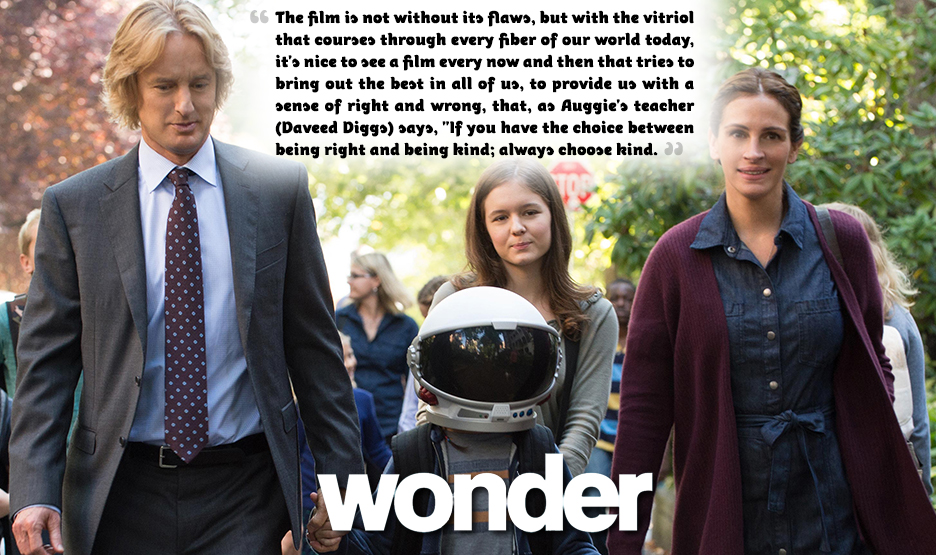 August “Auggie” Pullman (Jacob Tremblay) was born with a rare disease that has forced him to undergo several surgeries in his young life, leaving his face disfigured. He is protected from the cruel world by his loving, adorable (sometimes too adorable) parents: Nate (Owen Wilson), your typical fun dad who lives on a dream while not having much say in anything that happens; and Isabel (Julia Roberts), your typical doting mom, afraid of what might happen to her son when he finally ventures out into the real world. Up until now, she’s home-schooled Auggie, but with a new school opening in the area, she feels it’s time to test the waters to see if her baby can find his own path.

Tremblay is quite good in the lead role, portraying Auggie with fear and sadness over what others may think or say behind his back, but doing his best to cover it up with a mask of confidence and hope that he one day hopes to obtain. He wants to put himself out there, to develop life-long friendships, yet he’s always on guard about anyone reaching out to become his friend, as he’s never really sure if they’re doing so because someone made them or if they genuinely want to get to know him. We all know kids can be cruel, and the movie doesn’t shy away from throwing a few bullies (both young and old) in Auggie’s path. Director and co-writer Stephen Chbosky does a good job diving into the mindset of someone who would defend or condemn an outsider who may not fit in with normal social standards by showing that a lot of times, the influence of parents has at least some bearing on the attitudes and actions of their kids.

One thing that threw me off a bit while watching the film was the structure, which takes a few odd detours to show what’s happening from the point of view of different characters, including Auggie’s sister, Via (Izabela Vidovic), who loves her little brother despite being constantly ignored by her parents. She’s the epitome of someone who wants so desperately to be loved, but puts her own selfishness aside for the betterment of someone else. Auggie’s first, and best friend Jake Will (Noah Jupe) also gets a quick aside to provide context to the evolution of his not wanting to be a part of Auggie’s life in any way to picking a fight with another student in defense of his friend.

Finally there’s Miranda (Danielle Rose Russell), Via’s longtime best friend who cares just as much for Auggie as his own family. She delivers a somewhat out-of-place voice over to explain why she’s ignoring Via and has all but abandoned her since returning from summer camp. I’m not sure I bought her reasoning, not because it didn’t make sense, but because it comes very late in the film and the movie doesn’t do a whole lot to prove what she says, or lead into her actions in a bid at reconciliation.

And that seems to go for most of the film, which attempts to stay so idealistic, it doesn’t ever get itself dirty enough to warrant a lot of the changes the characters go through. Kids do things that go against their character’s, attitudes change on a dime, and forgiveness is given without a whole lot of turmoil or explanation. These elements do lead into some of the better moments in the film, but the passion behind those scenes could have been much more powerful had Chbosky delivered them with slightly more grit. Kids are smart; they don’t need to be coddled. It wouldn’t have hurt the film to dig just a little deeper to pull those emotions out and really drive a sense of dramatic tension throughout.

With that said, the film still holds a warmth that keeps you engaged, mostly due to the sincerity of the Pullman family. Wilson commands every scene he’s in by simply being himself, delivering every line with goofy earnestness; Roberts does a great job of being Wilson’s foil, providing the family with a much needed jolt of trepidation and insecurity; and Vidovic proves to be a powerhouse of subtlety, being their for Tremblay while traversing her own sense of loneliness, change and yearning for acceptance.

The film is not without its flaws, but with the vitriol that courses through every fiber of our world today, it’s nice to see a film every now and then that tries to bring out the best in all of us, to provide us with a sense of right and wrong, that, as Auggie’s teacher (Daveed Diggs) says, “If you have the choice between being right and being kind; always choose kind.” Perhaps there is hope for a future that focuses on bringing us together rather than tearing us apart. We’re all human despite our differences and until we can accept that diversity and fight those who may want to punish us for being different, nothing will change, leaving us all to live in a nasty, divisive world.

Oh and points for whoever was able to get past the Fort Knox that is Disney and Lucasfilm and acquire the rights to use Chewbacca throughout the film. You thought the illusive Bill Murray was hard to get; try licensing anything from Star Wars!

Next week, new movies include Coco, Darkest Hour and Roman J. Israel, Esq. If you would like to see a review for one of these, or any other film out next week, please respond in the comments below.

This entry was posted on November 19, 2017, 4:20 pm and is filed under Entertainment, Film, Movies, Reviews. You can follow any responses to this entry through RSS 2.0. You can leave a response, or trackback from your own site.