I am part of the problem. What problem? The overabundance of sequels, prequels, retreads, reboots, spinoffs and the Hollywood assembly line. I wrote a speech for a class in college denouncing sequels and their brethren, claiming we should get rid of them all but confessing my own culpability in keeping them alive by continuing to feed the beast with the purchasing of tickets. I can hide under the guise of being a movie critic, but unlike professional critics, I don’t get paid to see every movie that’s released, which means every choice I make when it comes to movies is of my own volition. At the same time, you never know when you’ll find a real gem of a film. There are plenty of sequels that build on the original story, add to the lore and give a sense of closure in some areas — sequels that give us more than we thought we wanted. On the flip side, there are films like The Nut Job 2: Nutty By Nature, a sequel to a forgettable throw-away animated film that does nothing to enhance anything but the studio’s bottom line. 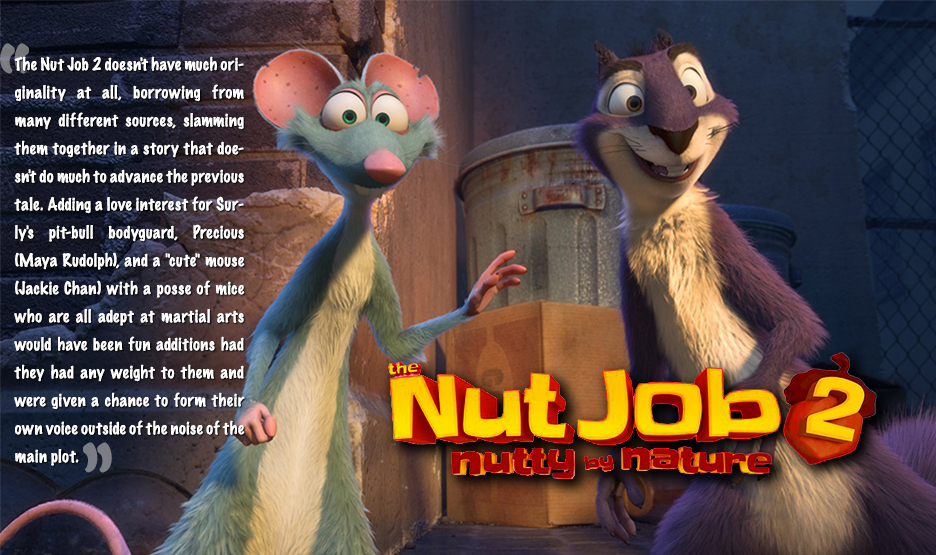 The Nut Job 2 begins a little after the events of the last film. After thwarting a gang of bank robbers who were using a nut store as a cover for their base of operations, arrogant, self-centered squirrel Surly (Will Arnett) and his gaggle of friends have taken over the shop to live high off the plethora of nuts left behind, just sitting there in the abandoned building. The only one who doesn’t believe sitting around enjoying the fruits of laziness is worthwhile is Andie (Katherine Heigl), Surly’s infuriating love interest. Within ten minutes of the opening of the film, the nut store explodes for arbitrary reasons, forcing the group to head back to the park from which they originally came to once again forage for food like real animals.

Enter the obese, greedy mayor (Bobby Moynihan) of the unnamed metropolitan, who wants to replace the park with a low-rent amusement park to line his coffers even further than they already are. He plays it off as if he’s going to relocate the animals to a new location, but behind closed doors hires a maniacal animal control company to go in and wipe the animals out. If that isn’t enough evil for you, the mayor is saddled with a bratty, spoiled, obese daughter (Isabela Moner) who screams and yells and throws tantrums when she doesn’t get her way. Now the animals must rise up against the evil mayor and his cohorts to stop the amusement park from taking away their home. (Did I mention the mayor was evil?)

If the description I just gave sounds familiar, it’s probably because The Nut Job 2 doesn’t have much originality at all, borrowing from many different sources (right down to a weird, unoriginal “outtake” that also shows Jackie Chan in the studio…), slamming them together in a story that doesn’t do much to advance the previous tale. Adding a love interest for Surly’s pit-bull bodyguard, Precious (Maya Rudolph), and a “cute” mouse (Jackie Chan) with a posse of mice who are all adept at martial arts would have been fun additions had they had any weight to them and were given a chance to form their own voice outside of the noise of the main plot. Even the majority of jokes feel like underwhelming retreads. When there is a decent joke that actually makes you to do more than chuckle, it ends up being a reminder of how lazy the writing actually is.

As mentioned earlier, the incident that forces the animals back to the park to defend it is an explosion that makes no sense. First off, if the building had been abandoned, there would be no heat, electricity or water running to the building. I know, it’s just a cartoon, but overlooking all of that, an explosion just seems way too easy. If writers Bob Barlen, Cal Brunker, and Scott Bindley had a demolition crew come in and destroy the building and take away the food supply, this would have felt not only more realistic, but it would have added depth to the character motivations, giving Sully and his team one more reason to defend the park when the demolition crews come in there. “The man” took away one food source, they aren’t going to let them take away another. Instead, we’re left with characters that are only doing things for selfish, prideful reasons.

There are some interesting setups, like the aforementioned mouse gang, but they’re never really paid off in any significant way. Take for example the hunt for a new park to call home. Andie somehow knows of another park across the city and heads there to get the lay of the land. They quickly discover that the “park” is actually a golf course. How do they play this realization off? By throwing in another maniacal human out to harm animals. By this point, it seems as if the moral of the story is that all humans are inherently evil and all animals are cute and adorable. Not sure how I’m meant to feel about that?

The Nut Job came and went pretty quietly back in January of 2014, and I’m sure a lot of people don’t even remember it being a thing at all. It made a good amount of money worldwide, but I don’t remember there being a whole lot of fanfare for a sequel (not like there is for an Incredibles 2). Neither film is bad, per se, they’re just mediocre and unremarkable; something to bide the kids’ time while you take a nap. They’re harmless on the outside, but underneath is the issue I spoke of before: by continuing to feed into this type of unnecessary sequel, we push Hollywood into believing this is what we all want, instead of new fresh material we can sink our teeth into. Then again, there comes a film like Annabelle: Creation, which is not only a well made horror film, it’s much better than its predecessor. So, what are we supposed to do?

Next week, new movies include The Hitman’s Bodyguard and Logan Lucky. If you would like to see a review for tone of these, or any other film out next week, please respond in the comments below.

This entry was posted on August 13, 2017, 4:27 pm and is filed under Entertainment, Film, Movies, Reviews. You can follow any responses to this entry through RSS 2.0. You can leave a response, or trackback from your own site.