There aren’t a lot of movies out there that leave me without a lot to say. Captain Underpants: The First Epic Movie is one of those. It sits in a weird pocket of enjoyment and confusion, where it’s difficult to put my thoughts into words. On one level, it’s a cute movie that kids will no doubt love for its joviality and simple message. But in some ways, that’s exactly why it fails to capture your attention for more than two minutes at a time, turning what could have been a clever, subversive movie that kids of all ages could enjoy into nothing but a story your six-year-old might come up with on a hot summer day at the beach. Then again, I believe that’s the point since the entire movie is told through the juvenile minds of a couple of 1st grade boys. 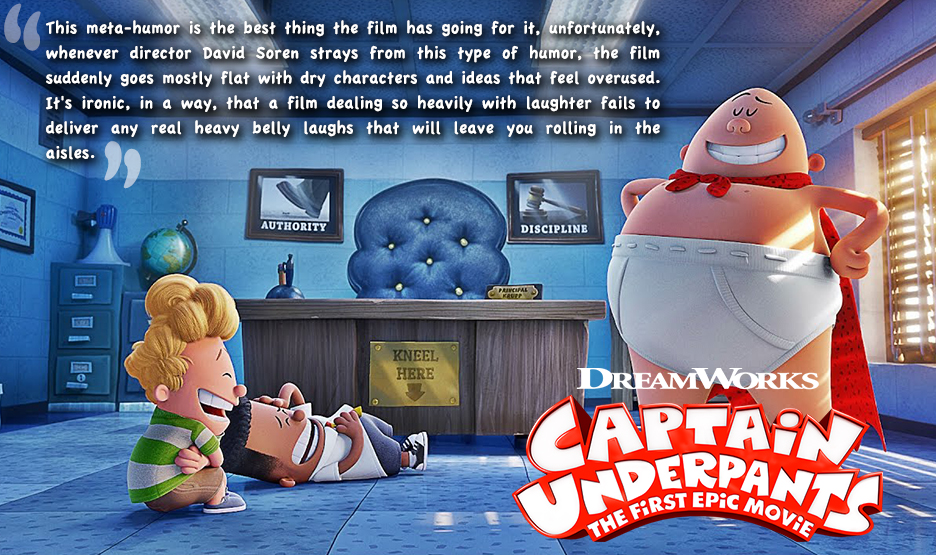 George and Harold (voiced by Kevin Hart and Thomas Middleditch, respectively), just want to laugh, tell stupid stories and have fun at the expense of others. Their sense of humor is, as characters in the movie put it, the lowest form of humor — that is to say, when their kindergarten teacher talks about Uranus, the two become fast friends for reasons I’m sure you can infer. The two also connect on a different level — their artistic tendencies. George loves to tell stories and Harold loves to draw, so combined together, they create their own comic book company in their tree house. Their most popular character: Captain Underpants, an enthusiastically dimwitted superhero who comes from a planet where underwear is the only fashion. After being blasted into space when his planet was destroyed — a la Superman — and armed with nothing but his tighty-whities and trusty cape, Captain Underpants saves Earth from evil.

When they’re not hanging out at their base of operations, they’re causing havoc at school with a variety of pranks, most of which are shown in a montage to which George says is awesome when seen thrown together like that. This meta-humor is the best thing the film has going for it, unfortunately, whenever director David Soren strays from this type of humor, the film suddenly goes mostly flat with dry characters and ideas that feel overused. It’s ironic, in a way, that a film dealing so heavily with laughter fails to deliver any real heavy belly laughs that will leave you rolling in the aisles.

So what about Captain Underpants? He comes into play when the overly-stressed, lonely school principal (Ed Helms) has finally reached his prank limit. On the surface, he despises the boys for their constant undermining of authority. But on a deeper level, there’s almost a sense of jealousy guiding his actions. He sees how strong the bond is between these boys and that level of friendship is something he’s missing. It’s not a focal point of the film, but the kernel of the idea is strong and is resolved in a pleasant, caring way that completes the character arcs of all the main characters.

Now, back to the task at hand. Threatening to split the boys up by placing them in separate classes (the horror, though I did buy that younger kids might feel that not being in the same class might end their friendship), George hypnotizes their principal with a hypno-ring he once found in a cereal box. Figuring he can turn him into anything the boys desire (and I’m surprised Harold never tries to turn him into a dolphin), George turns him into Captain Underpants. Within seconds, the principal has stripped down and has jumped out the window to find scum and villainy. And in precise superhero fashion, this incident coincides exactly with the arrival of what will turn out to be Captain Underpants’s main nemesis.

In this instance, it’s Professor P. (Nick Kroll), an intelligent inventor who takes the position of science teacher to try to find out how to eliminate laughter from the world. This is where the infantile sense of humor comes into play in a big way. The “P” in Professor P. stands for Poopypants, and the reason he wants to destroy laughter is so that people will stop making fun of his name and earn respect for his world-changing inventions. I like that the main conflict may never have happened had it not been for George and Harold, who decide to reveal the professor’s name in a new edition of Captain Underpants, where P.P. (get it, though they surprisingly never mention this at all in the movie) is the main villain and inadvertently reveals the key to ending laughter for good.

What else is there to say about the film? I’m not exactly sure. The action sequences are fun, especially when they poke fun at superhero tropes that infest most superhero movies. There’s one clever sequence when the danger gets so bad that the boys stop the action to give us a play-by-play of what went down in flip-book fashion. The idea that the principal switches from principal to Captain Underpants with the snap of a finger and back again when hit with water, is also one that plays well, though the main gag (where the kids continually splash water on him and them immediately snap their fingers over and over) does wear a little thin, especially when they do it more than once.

Basically, it’s harmless fun that sparks some interesting ideas but doesn’t allow them to blossom into greatness due to the six-year-old sensibilities that the creators tend to favor over the subversive meta-humor that any child (including those above the age of ten) can truly appreciate with a good hearty laugh.

Next week, new movies include The Mummy, It Comes At Night and Megan Leavey. If you would like to see a review for tone of these, or any other film out next week, please respond in the comments below.

This entry was posted on June 4, 2017, 7:21 pm and is filed under Entertainment, Film, Movies, Reviews. You can follow any responses to this entry through RSS 2.0. You can leave a response, or trackback from your own site.