Even though it’s just as important to the quality of a film, production design isn’t talked about a lot when it comes to what makes a movie great. Bad acting keeps the viewer from investing in the emotion of a character, poor cinematography turns the film’s visual appeal sour, and bad sound design can make one’s ears bleed, but mediocre production design will make an entire film feel inauthentic. Like all aspects of a film, production design enhances the story, adding visual cues to character and location that are absorbed by the viewer throughout the film, adding layers to characters, locations, and mood that we didn’t even know we needed. The items placed in a bedroom, the wardrobe worn by extras, the color palette of a city landscape — they all hold meaning within the world the filmmakers are creating, and if just one thing is out of place or doesn’t make sense, viewers will notice, even if only subconsciously. I bring this up because Rogue One, the first of many standalone entries in the ever-expanding Star Wars saga, must rely heavily on the production design to make this fun, intense chapter fit into the massive world correctly. 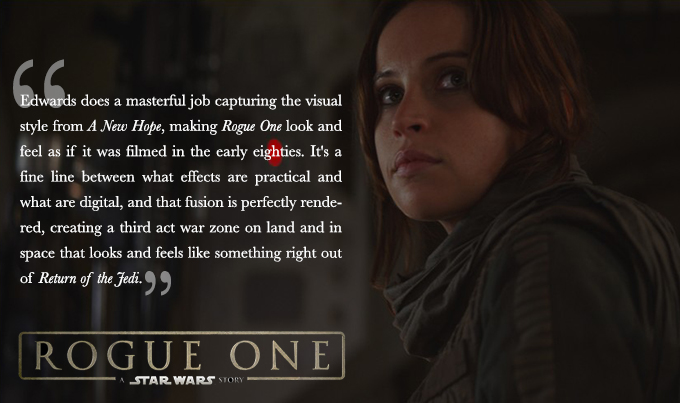 When George Lucas brought Star Wars back to into the limelight with 1999’s The Phantom Menace, some hardcore fans (and some Star Wars newbies) complained about the technology presented in the film as it related to the original trilogy. And I’m not talking about the overuse of CGI or behind the scenes tech; the prequel trilogy was supposed to take place twenty/thirty years prior to A New Hope, so how in the world could the technology used by the characters in the film feel so much more advanced?  Some would argue that the original trilogy was about scrappy characters that didn’t have access to high-end tech in the way the prequel trilogy characters do, but even if that were true, it still may have felt like it didn’t belong. Luckily, Director Gareth Edwards and the team behind Rogue One learned from that mistake (as well as taking a cue from J.J. Abrams) and made sure to painstakingly recreate every facet of A New Hope‘s aesthetic — from set design to costuming and technology — so that we, the viewer, would believe without a doubt that this chapter takes place days prior to the events that bring Luke Skywalker into the action.

Jyn Erso (Felicity Jones) is a criminal imprisoned by the Empire for various high crimes and misdemeanors. When rebellion leader Cassian Andor (Diego Luna) discovers that her father, Galen (Mads Mikkelsen), played a critical role in the construction of a super weapon the Empire plans to use to destroy the rebellion once and for all, the rebels break her out of an Imperial prison camp so that she might help them track down Saw Gerrera (Forest Whitaker), an old friend of the family who has broken from the rebellion to fight against the oppressive Empire on his own. They’re hoping that once Saw sees a familiar face, he will help lead them to both her father and the pilot (Riz Ahmed) Galen has trusted to deliver a secret message to the rebels that will help them take down the Death Star before it has a chance to destroy the universe.

Joining Jyn on her quest to track down Galen are Cassian, his reprogrammed Imperial droid K-2SO (Alan Tudyk), and a couple of tag-alongs in the form of Chirrut Îmwe (Donnie Yen), a blind monk and protector of the Jedha temple (which no longer needs protecting now that the Empire has all but stripped away every last piece of kyber crystal in order to power their new weapon), and Baze Malbus (Wen Jiang), loyal friend and bodyguard of Chirrut. This ragtag team of misfits works extremely well together. Each one has a distinct personality and skill set that pairs well with all the rest. Not one of them is wasted, as they each have a specific task that help in the final result. And though it’s not quite as magical or electric as the original cast, the way in which each actor conveys the strengths and weaknesses in their characters from the first moment we meet them goes a long way to building that alliance without having to spend a lot of time getting to know them.

Of course, this wouldn’t fit into the cannon without having a few Easter eggs and call backs to previous films to tease hardcore fans with. And there are many, some large, like like the not-so-secret appearance of Darth Vader (returning to the big screen in all of his Dark Lord glory), and some small, like the appearance of Ponda Baba and his hotheaded bar mate, Evazan, who will later terrorize Luke in the Mos Eisley Cantina on Tatooine. These aren’t just Easter eggs, though; none of them are used for nostalgic purposes alone (okay maybe Ponda and Evazen are, but I digress). Each one is used intelligently so as not to distract from the overall story. The most surprising for me was the appearance of a character from the prequel trilogy (it’s okay, it’s not Jar-Jar!), one that makes complete sense and adds much needed depth to the film and the saga as a whole.

But as mentioned earlier, the true hero of this film lies in the production design, which, from the costumes, to set design, makeup and of course technology, hits on all the right cylinders. Edwards does a masterful job capturing the visual style from A New Hope, making Rogue One look and feel as if it was filmed in the early eighties. It’s a fine line between what effects are practical and what are digital, and that fusion is perfectly rendered, creating a third act war zone on land and in space that looks and feels like something right out of Return of the Jedi.

Right from the jump, people were anxiously awaiting to see whether Disney would do right by the Star Wars franchise, and now that we’ve seen a return to form with The Force Awakens, we’re given another treat with Rogue One, a story that gives insight, if only brief, into how the rebellion secured the plans for the Desth Star, how they know how to destroy it, why Leia was on her way to Tatooine and how Darth Vader knew what ship the Death Star plans were being stored. All of this and more packed into a two hour war film that doesn’t try to be anything more than another exciting chapter in a saga that has a lot of stories left to tell.

Next week, new movies include Passengers, Assassin’s Creed, Fences and Sing. If you would like to see a review for one of these, or any other film out next week, please respond in the comments below.

This entry was posted on December 20, 2016, 11:27 am and is filed under Entertainment, Miscellaneous Stuff, Reviews. You can follow any responses to this entry through RSS 2.0. You can leave a response, or trackback from your own site.