As the credits started rolling for Nocturnal Animals, a slow burn thriller that puts aggravation to the test, the response among my fellow patrons tended toward, “Well, that was a waste of two hours.” The sentient, I believe, was in regards to how writer/director Tom Ford (based on the novel by Austin Wright) ended his unusual study of pain, regret and the power of grief, which left a very open-ended nuance to an otherwise stellar interpretation. From what I can gather, those who were quick to judge the ending simply wanted an entertaining time at the movies. There’s nothing wrong with that, but as there are plenty of films out there that can be watched (where viewers receive a clear-cut, and usually happy ending), a film like Nocturnal Animals must be ingested. That is to say, the film’s message isn’t presented on a silver platter with a nice, clean bow; it’s up to the viewer to discover the subtle clues to find their understanding of the material. 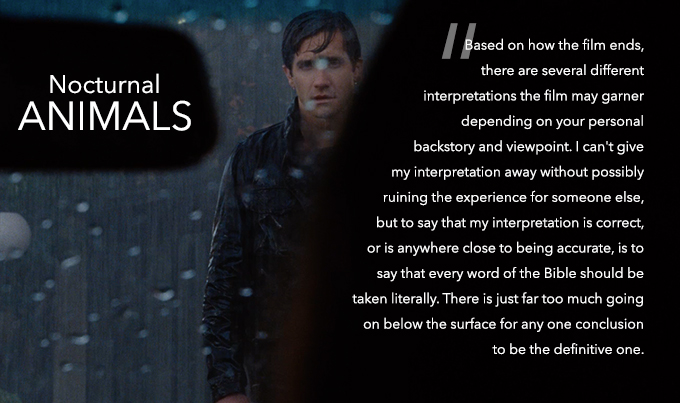 Amy Adams plays Susan Morrow, a lonely art gallery owner suffering from insomnia who doesn’t quite realize she’s stuck in a nothing of existence. Her workaholic husband (Armie Hammer) may be having an affair and her job brings her high society perks that leave her devoid of happiness. It’s not until she receives a draft of her ex-husband’s (Jake Gyllenhaal) new novel, “Nocturnal Animals” (which also doubles as his pet name for her) that this identity crisis comes into focus. As she reads the story, and devours the heartbreak of a man who lost his wife and daughter to a murderous psychopath, we begin to live the successful loneliness that many aspire to, and how she arrived at this point in her life.

The majority of the movie, though, centers on the events of the book itself. Gyllenhaal does double duty as the book’s protagonist, Tony Hastings. On their way to an undisclosed vacation destination, he, along with his wife (Isla Fisher) and daughter (Ellie Bamber), choose to drive through the night upon a lonely highway and are subsequently waylaid by a car full of aggressive hoodlums, led by deviant Ray Marcus (Aaron Taylor-Johnson). After Ray and his friends force Tony off the road to “swap insurance” due to a minor “fender bender,” they kidnap his wife and daughter and leave him stranded in the middle of the Texas desert. Tony eventually finds his way to a police station, where he teams with Bobby Andes (Michael Shannon), a Texas Ranger who seems to be on his last leg, to hunt the violent criminals down.

It should come as no surprise that everyone involved is extraordinary, oozing a mix of charisma, devastation, desperation and loneliness, sometimes at the very same time. Even those who show up for just a scene (such as Laura Linney as Susan’s mother, doing her best impersonation of Judith Light from Who’s the Boss if she were a hard-nosed megalomaniac, or Michael Sheen as Susan’s well-to-do brother) bring their A-game to the proceedings without batting an eye. But no movie can rely on talent alone, so it falls on the story to hook us and keep our minds engaged.

There are essentially three parts to the plot — Susan’s current life, the book and the flashbacks to a happier time. Easy enough, but because the plot is so subtle, some viewers might not fully understand where the film is heading if they aren’t fully invested in every simple, little detail. These plots aren’t your normal A-, B- or C-plot; they are all one major plot, each one leaving behind clues as to the overall idea. If you ignore one, or aren’t paying attention (which is quite easy to do, especially with Susan’s mundane plot line), resolutions won’t make as much sense, if any sense at all.

I do confess; the average movie going voice in me — the one that just wants to be entertained without having to think about anything — would much rather Ford had focused entirely on the Hastings family from the book, as these elements were the most engaging and could have provided a much more powerful punch had Ford had more time to flesh out the relationships, the torture of the family, and the hunt for vengeance. But the artistic voice in me — the writer, the filmmaker, the artist — knows that the story in the book is only one piece to the puzzle, and without the other two pieces, we have just another backwoods Deliverance-type thriller. It’s in those quieter, more mundane aspects of the film that we find the nuance to both Tony’s vengeance and his non-stop drive to find justice for being wronged.

I can’t say I still know what Ford is actually trying to say, but I do believe that’s the point. Based on how the film ends, there are several different interpretations the film may garner depending on your personal backstory and viewpoint. I can’t give my interpretation away without possibly ruining the experience for someone else, but to say that my interpretation is correct, or is anywhere close to being accurate, is to say that every word of the Bible should be taken literally. There is just far too much going on below the surface for any one conclusion to be the definitive one. I’m sure Ford has his idea as to what the end actually means, but does that mean he didn’t leave it open to interpretation? That, of course, is up for the viewer to decide.

Next week, new movies include Rogue One: A Star Wars Story and Collateral Beauty. If you would like to see a review for one of these, or any other film out next week, please respond in the comments below.

This entry was posted on December 11, 2016, 4:22 pm and is filed under Entertainment, Film, Movies, Reviews. You can follow any responses to this entry through RSS 2.0. You can leave a response, or trackback from your own site.