Two films came out this weekend that couldn’t be more different. Almost Christmas is a run-of-the-mill Christmas dramedy and Arrival is a quiet, thought-provoking science-fiction drama. One follows all the rules, staying true to the cliche elements of the genre; one breaks the rules by presenting its subject matter in a smart, realistic fashion. One has a black cast with a token white guy; the other has a white cast with a token black guy. That last one was a joke, of course, but the point I’m trying to get across is that it’s perfectly acceptable to travel the ledge on either side of the spectrum, so long as the final product is entertaining and taps into the emotions the filmmakers were attempting to embrace. Familiar and comfortable can be just as engaging as introspective and unique. 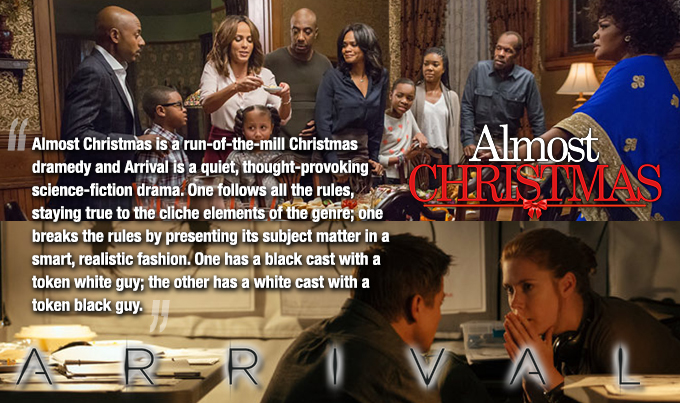 In a nutshell, Christmas is about a family coming together for Christmas a year after the family matriarch passes away. Walter (Danny Glover) is still mourning the loss of his beloved wife and has begun considering the sale of his long-time residence, believing it will help ease his grief. At the same time, he tries desperately to honor her memory by cooking her signature sweet potato pie, which he consistently fails to do because there’s no recipe written down. Making up the rest of the family are Walter’s four kids: Cheryl (Kimberly Elise), a doctor married to an ex-professional basketball player (J.B. Smoove); Christian (Romany Malco), a workaholic father of two running a campaign for mayor; Rachel (Gabrielle Union), an out-of-work law student who doesn’t know when to set her ego aside and ask for help; and Evan (Jessie T. Usher), a star football player prepping to play in his first Bowl game after recovering from an undisclosed injury.

From those descriptions alone, if you don’t already feel the story lines are pretty formulaic, here’s a quick rundown of the subplots — sisters that don’t get along, a star athlete addicted to pain killers, a neglectful father, a cheating husband, the threat of a homeless shelter closing, and the return of a high school crush (Omar Epps). There are also some confusing setups and plot devices that don’t quite fit, the most egregious being the mayoral campaign. The film goes out of its way to clarify this is Christmas 2016, which means that, unless there’s a specific need for a special election, all of the major elections would have been completed, yet Christian is campaigning as if it was the end of October, with no explanation for why. And that lack of rationalization infiltrates almost all of the subplots — not much is ever justified.

But no matter how riddled with cliche’s the film may be, it settles nicely into a Christmas spirit vibe, helping the film rise above all of its flaws. The actors are all very engaging and able to create characters that connect with you in the most basic way. They aren’t very deep, but they’re fun to be around: energetic, sweet and honest in their charisma. Whenever a story line is wrapped up, no matter how predictable, they pull all the right strings and never go against the characters that were initially set-up. It’s because of this cast that the film wasn’t relegated to Lifetime or Hallmark, and even though it doesn’t try to be anything new, it does do what any Christmas movie about the re-connection of family is meant to do: lift one’s spirits.

Arrival, on the other hand, feels as realistic as any movie about aliens arriving on Earth could be. There’s no massive explosions, no exciting eye-candy of action or war between humans and aliens seeking the destruction and salvation of the earth. Arrival is the thinking man’s sci-fi alien drama, one that seeks to play with your head while reveling in the possibility of what might actually happen if alien spaceships suddenly appeared hovering in random places around the globe.

Amy Adams is once again terrific as Dr. Louise Banks, a linguist at an unspecified university who’s called upon by Colonel Weber (Forest Whitaker) to try and decipher the alien’s language. Joining her on a trip to Montana (where the aliens have chosen to park one of their ships) is Ian Donnelly (Jeremy Renner), a theoretical physicist who’s brought on board to decipher whatever Louise discovers. Heading up into the ship every eighteen hours to speak with the aliens and find common ground, Louise and Ian learn how to communicate through basic words and images. At the same time, a dozen other countries are doing the same thing with their own hovering crafts, each one learning something different about their new arrivals.

What I felt was most realistic about the film was in its depiction of how we as a people, as a nation and as a world would react to the events that transpire. As newscasters remain on the air to repeat the same things over and over without knowing any real facts, governments prepare for the worst. As scientists attempt to learn from the visitors and find out why they’ve arrived, politics keeps them from reaching further, scared that the only thing they want is to destroy the human race. Each government has their own ideas and agendas, and as new information is revealed, the more each country separates itself from the rest of the world until we’re all divided with the same intent: to stop annihilation.

Much like Christmas, every actor does a terrific job in engaging the audience. There isn’t one dull moment in a series of dull moments (it’s super exciting to watch a linguist communicate with an alien species, is it not?), due mostly to the writing, the acting and the direction of Denis Villeneuve, who’s able to orchestrate a steady pace, even as the majority of the two-hour film rests on the spewing of psychobabble and scientific theories. He immerses us in this world with intrigue and an interesting twist that may not have the biggest impact on the film itself, but adds depth to the underlying meaning of the film and it’s study of how we need to act should we ever want to save the world from not only foreign entities, but ourselves as well.

My grade: Christmas: B+; Arrival: A

Next week, new movies include Fantastic Beats and Where To Find Them, Bleed For This and The Edge of Seventeen. If you would like to see a review for one of these, or any other film out next week, please respond in the comments below.

This entry was posted on November 17, 2016, 8:48 pm and is filed under Entertainment, Film, Miscellaneous Stuff, Reviews. You can follow any responses to this entry through RSS 2.0. You can leave a response, or trackback from your own site.