Word Counts and Why They Don’t Matter

What’s the correct word count for ?

How many words should there be per chapter?

Should I split my book into two to keep the word counts down?

I have to add/shave ‘x’ amount of words to reach my target number.

This ominous pressure to land the perfect word count for a book or genre for the sheer purpose of writing the “perfect” book really ruffles my feathers. There tends to be a big misnomer out there that if a book in a certain genre is too long, no one will read it, or if a book is too short, readers will think they’re getting jipped. Now, I’m sure there are plenty of readers out there who hate books that are longer than a certain number of pages, or won’t fork out $0.99 for a short story, but the majority of readers, I’m sure, care more about reading a good, strong, compelling story as opposed to how long it may or may not be. And though many a teacher may agree and profess that word counts are the end all, be all of writing, I’m from the school that word counts do not matter one iota. And I’ll tell you why.

Stories have no limits.

It’s that simple. For any type of writing to be “perfect”, it has to be organic. Of course there are general rules that must be adhered to in order to write successfully, but stories are fluid creatures; as a writer you never know how long a story needs to be until you tell it. Stamping a strict word count on a story in any form before you’ve even written a word limits your ability to create freely. You simply lock yourself in a cell and strap a chain around your creativity, raising self-imposed barriers that keeps your story from being what it’s meant to be. And in turn, yourself from being the writer you’re meant to be.

How many times have you been told to be yourself? That you can’t allow anyone to keep you from pursuing or reaching your dreams? We’re all unique and no one should be allowed to dictate how to dress, or what music to listen to, or what food to eat? So why then, would you tell your stories they have to stick to a particular word count? By doing so, you run the risk of losing the voice that makes you different, that makes you unique, that makes your story unique. There are hundreds of thousands of books published each year. How do you expect to be noticed if you’re simply following in the same line as thousands of others?

Here are a couple of basic examples:

You “accidentally” write 40,000 words more than you planned. Editing cuts out about half of those words, and cutting your babies shaves it down a little more. But there’s still a lot to cut to reach your “magic number.” So now you start cutting things out that may matter more than you realize. You’ll see this a lot in film, where a studio forces a director to cut a film down to a certain length. The theatrical release is fine, but then you come across the director’s cut of the film and notice how much better it is. That original vision was hurt because the studio felt the length had to be something the film wasn’t. It needed more time to speak and breathe.

Then there’s the flip side, where you do everything you can, but the word count still comes up short of your preferred length. Now, you’re left to shove filler into the book to reach your plateau. But how many times have you watched a television show where certain episodes feel like nothing but filler? It’s because the studio wants to produce a set number of episodes per season, yet the story the writers have to tell doesn’t need that many.

And this idea isn’t limited to entire books. Chapters run the same risks when adding an arbitrary word count. A chapter, essentially, tells its own confined story. Each one is meant to have a beginning, middle and end, and should in some way move the story forward. Why is it, then, that you would think every chapter is going to be exactly the same? Whether a chapter needs just 10 words or half the book, so be it. Forcing yourself to balance your chapters with the same number of words stifles ingenuity. 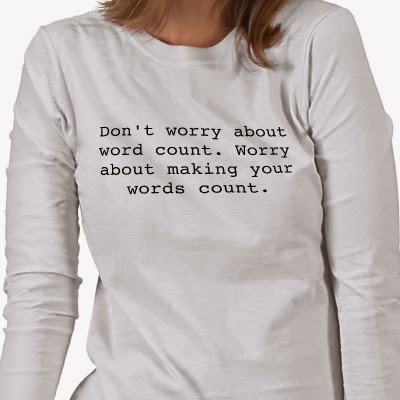 Editing, changing, cutting and adding are all part of the editing process, and there’s nothing wrong with that — when you’re doing it for the sake of story, meaning or character. Whether it’s 100 words or 1,000,000, if you’ve allowed your story to speak for itself, on its own terms, readers will be much more open to reading it, simply because you haven’t forced it to be just another in a pile of conformity.

So tell me: have you ever worried about word counts to the detriment of your book?

This entry was posted on October 18, 2016, 4:58 pm and is filed under Books, How To, Novel, Short Story, Writing. You can follow any responses to this entry through RSS 2.0. You can leave a response, or trackback from your own site.