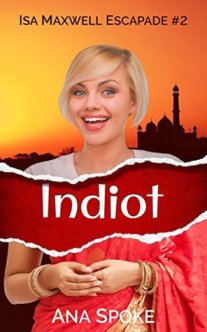 Indiot — a Novel by Ana Spoke

Indiot is the follow-up to Ana Spoke’s debut novel, Shizzle, Inc., chronicling the hijinks of Isabella Maxwell, a naive blond who wants nothing more than to change (or help) the world, getting herself into extraordinary circumstances along the way. In Shizzle, Inc., this trouble came upon her mostly by accident, as the world seemed to open opportunities she’d then exploit for her own means, messaging the truth and more often than not, putting her foot in her mouth. In Indiot, the tables turn a bit, as Isabella (or Isa, for short) begins to take hold of the reigns of her own destiny. She still gets into plenty of trouble, but instead of unbelievable circumstances pushing her into various comedic predicaments, her conscious decisions now tend to lead her into trouble — a switch that gives her narrative more reliability than in Shizzle, Inc. It doesn’t feel as if Isa is lying as much about what’s happening, making her adventures more authentic and enjoyable. At the same time, her character seems to grow too much too fast, as if the lessons she learned in Shizzle Inc. have taken root, but have matured faster than an alien baby in a science-fiction movie.

I was pleased to have been a part of shaping Indiot into its final product by offering my feedback to Ana as a beta reader. For those who may not know what that means, a beta reader is someone who reads a rough draft of a novel (usually one that’s been rewritten a few times and is almost ready for final editing) to give feedback in relation to grammatical mistakes, inconsistencies, plot holes or poor character developments that the author themselves have become blind to after having read the story multiple times over. In short, it’s a fresh pair of eyes. I read Indiot for the first time with a very technical eye, looking for those things that may need to be tweaked to create a smoother, more consistent read. With the finished product, I used a much more reader-friendly eye, enjoying the book as a reader rather than nit-picking everything I could nitpick.

Regardless of how I read the book, though, I still have issues, mostly with some of the developments that move Isa through her journey. After receiving an email from an Indian prince seeking money to help get his inheritance (from which Isa will be very well compensated in return), Isa decides to head to India to give the prince the money in person, then use her newfound wealth to help the orphans of the world. But after learning the entire thing was a scam (there’s that naiveté) mid-flight, Isa decides she might as well stay and see a little bit of Delhi. That decision leads to her passport and ID being stolen, sparking her new, very amusing adventures with a bevy of fun, new characters, like the Santa-looking taxi driver Kabir and the friendly-yet-devious Vivian, who becomes the spark plug for Isa to discover her new voice and, in a way, finally learn to grow up.

At first, I wasn’t a fan of that growth as written; it didn’t feel as organic as it should have been. Finding out that the “prince” was a scam so early in the book was one of my initial notes, because I felt that her finding the prince should have remained one of the driving forces that kept Isa in India. To me, what actually drove the narrative didn’t seem to fit with her personality as a character in the same way that motivated her in the first book, making Isa feel like a much different character. But upon second read, I didn’t mind this development (or the events that happen afterward) quite as much. I don’t know if it’s because I already knew what was going to happen, or if it was because some of the notes provided by me and/or Ana’s various other beta readers were applied, but the story as a whole had a much better flow that felt more natural. There are still moments that feel out of place, unnecessary, or wasted — one scene in particular, in which Isa goes “undercover,” has such a great build-up, when the actual event happens… wait? That was it? — however, I was invested in the story more than I was the first time, which is a testament to the author, who not only made the appropriate changes where needed, but stuck to her guns on elements she felt in her heart were true to what she was creating. It’s because of that, I have to admit, that Isa is starting to grow on me as a character.

I will say that, even from the first read, I thought Indiot was overall a better book than Shizzle, Inc. The way Ana writes Isa, giving her such a sweet, lovable voice, draws you in with a compassionate mindset for this flawed, but tenacious character. Though the writing doesn’t always flow perfectly (mostly in the dialogue, which on occasion can seem a bit stunted), the characters are fun, the plot twists are interesting (even when they seem a little cliché) and the lead-up to the next book is well-done and introduced in a nice subtle way that doesn’t overshadow the events of Indiot, but give a nice segue into the next chapter in Isa Maxwell’s disastrously entertaining life.

Ana Spoke lives in Australia with her fiancee and writes full time, whether that’s continuing the adventures of Isa Maxwell, or using her blog to discuss her experiences with marketing and self publishing.

Check out all of Ana’s social media platforms:

If you are an independent author and would like your book reviewed, let me know in the comments section with a link to where I can purchase the book. If I find it intriguing, and it’s something I think I’d like, I will purchase a copy and add it to my reading list. I will be doing one independent book review per month, so not all requests will be accepted.

This entry was posted on July 29, 2016, 6:15 pm and is filed under Books, Entertainment, Novel, Reviews. You can follow any responses to this entry through RSS 2.0. You can leave a response, or trackback from your own site.