I wasn’t intending to see the new iteration of Ghostbusters. And it wasn’t because it was an all-female cast, or because it didn’t look funny (trailers can be deceiving), or because the special effects looked like crap, as a lot of annoying little trolls slammed the trailers with. It’s because I’m getting rather tired — as I’m sure a lot of people are — of Hollywood dipping back into a well no one asked them to dip their money-grubbing hands into. The majority of movies are made for a certain generation, so when you see all of these retreads and reboots and sequels and prequels… what does that really say about our current generation of movies? I’ve argued this point before, but with remakes of The Magnificent Seven and Ben-Hur on the way later this year, it’s starting to get rather pathetic.

The thing is, I started to hear some not so terrible things about Ghostbusters, so I decided to give it the benefit of the doubt, to see if, unlike most other remakes, this one could actually live up to its predecessors — sort of a test to see if the trend of poorly remade classics could turn around for the better. I must confess — this new iteration of Ghostbusters isn’t necessarily a bad film; it’s simply a pile of missed opportunity. 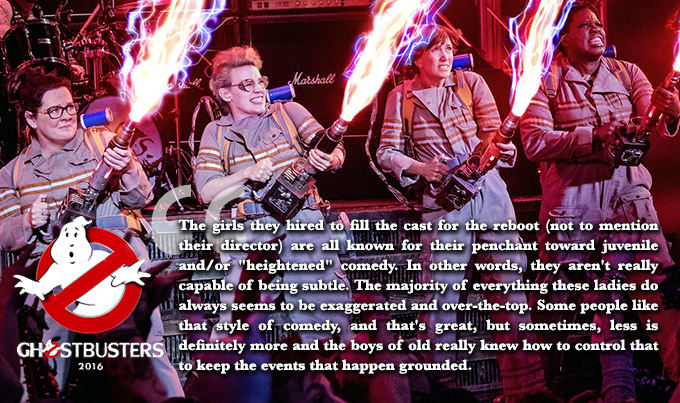 From what I’ve gathered about the hullabaloo surrounding Ghostbusters, most people aren’t necessarily upset with Paul Feig or Columbia Pictures for casting an all-female team (or for switching gender roles, as Chris Hemsworth takes over for Annie Potts… more on that later). It seems it’s more about the film being a complete remake as opposed to a sequel. Now sequels are another brand of film making I’m not all too keen on (though I hypocritically go see them all the time, well, just because), but it seems the most recent trend in Hollywood is rebooting franchises with sequels that are ten, fifteen, twenty years in the making. It’s one trend I don’t mind so much, as occasionally it’s fun to revisit characters we loved from so long ago and get to hang out with them again… sort of like a high school reunion of sorts. Had the producers went along with this trend and made this film a true sequel — wherein the events of the original films remained a part of this film’s lore — I believe more people, such as myself, would have accepted the film instead of outright hating it before it was even released.

(Here’s just one possible scenario of many: in the film, all of the original cast (sans Rick Moranis, and of course the late, great Harold Ramis) make cameo appearances that would have been so much more fun had they been their original characters. As I’ve said from the jump, one of the new team should have been related to one of the old team, thus building on that connection. The writers almost nailed it when they cast Ernie Hudson as the uncle of Patty (Leslie Jones’s character). Had this been a sequel, that connection would have made perfect sense and would have helped ignite this reboot in a completely different, nostalgia-friendly direction. It would have given more reason for Patty to want to join the team, or at the very least, given her character a lot more weight among the rest of the cast — not to mention making some of the events that happen a lot more fun.

As it stands, the film feels like it’s missing something. It feels very scrambled, attempting to stay true to the original while paving the way for its own brand of humor. But let’s face it — this era of comedy is strikingly different than when Ghostbusters was first introduced. The original cast was very sardonic and full of irony. The girls they hired to fill the cast for the reboot (not to mention their director) are all known for their penchant toward juvenile and/or “heightened” comedy. In other words, they aren’t really capable of being subtle. The majority of everything these ladies do always seems to be exaggerated and over-the-top. Some people like that style of comedy, and that’s great, but sometimes, less is definitely more and the boys of old really knew how to control that to keep the events that happen grounded.

Kristen Wiig plays Erin Gilbert, a professor at Columbia who’s gearing up to receive tenure when a man shows up with a book she’s been trying to distance herself from since she wrote it. It seems her old friend and co-author, Abby Yates (Melissa McCarthy) recently released the book online without her permission. When Erin goes to have Abby remove the book, she gets roped into going along with her (and Jillian Holtzmann (Kate McKinnon), Abby’s lab partner) on a ghost hunt in an old, supposedly haunted mansion. Everything snowballs from there, and like in the original, the girls are all fired from their respective jobs and decide to start up the ghost busting business. I will say, I did like the nod to the original when the girls visit what I can only assume is the original firehouse, only to give it up because of the exorbitant rent.

Casting a film can be extremely hard, especially when trying to match the cast of a franchise so beloved by many. One wrong choice and you lose a certain part of your audience. I tend to like Wiig and McKinnon can be really funny when she’s got good material to work from, so I liked their characters the best. And Leslie Jones is fine, but boring as the requisite black ghostbuster. It’s Melissa McCarthy that stands out as being the most miscast. She essentially plays the Ray Stantz character, i.e. the excitable paranormal geek. But unlike with Dan Aykroyd, there’s something about her that doesn’t lend itself well to spouting out technological or paranormal mumbo-jumbo. It all just felt consistently off whenever she opened her mouth to speak. The one major highlight of the film (sorry to say, ladies… or should I say, happy to say for those ladies reading this review) is Chris Hemsworth, who steals every scene with the lunacy of his typical beach-blonde female bimbo persona.

The real misstep, though, comes in the form of the script, which feels confusing, to say the least. The plot, which involves a lonely guy trying to start the apocalypse with devices that ignite supernatural fault lines in hopes of opening a vortex to the other side, is fine and works well enough. It’s everything else that can’t be reconciled, as Feig and writing partner Katie Dippold can’t seem to keep the character’s motives straight from one scene to the next. For example, Patty starts the film out as a subway attendant who discovers one of the ghosts that manifest around the devices. She eventually meets the ladies and horns her way onto the team. That’s all well-and good until two scenes later when she complains about being dragged into this mess of fighting ghosts, as if the others pulled her into it against her will. Another example includes Erin reiterating late in the film how bad she is with the equipment when, up until that point, there’s been no real indication that she’s had much of a problem with any of it.

Nothing in the script, including the steps it takes for the girls to become ghostbusters, or the inane attempt at creating a new breed of Marshmallow Man, feel organic, and the events that happen directly after the climax are confusing and never explained. Though the special effects are fine and there’s one very nice action sequence near the end, the film just never finds its voice. Which is a little disheartening when just a few little tweaks and an acknowledgement to the original would have provided so much more ectoplasm for this tired retread.

Next week, new movies include Ice Age: Collision Course, Star Trek Beyond and Lights Out. If you would like to see a review for one of these, or any other film out next week, please respond in the comments below.

This entry was posted on July 19, 2016, 9:20 am and is filed under Entertainment, Film, Movies, Reviews. You can follow any responses to this entry through RSS 2.0. You can leave a response, or trackback from your own site.