Since their inception in 2010, Illumination Entertainment has proven to be a force to be reckoned with. They may have gone a little too minion happy, proving there can be too much of a good thing, but minions aside, they have proven themselves to be a strong contender in the field of computer animation, alongside Blue Sky (Ice Age series), and Dreamworks Animation (Shrek series). With The Secret Life of Pets, Illumination’s newest entry that doesn’t include minions (no, wait… I take that back; there is a somewhat humorous short prior to the movie that does include our favorite yellow pills… sorry folks, you just can’t get away from ’em!), the studio tries to take what it’s learned thus far in their young life and apply some Pixar magic, a combination that helps them raise the bar, but still fail to capture the pure sweetness and storytelling capacity of that aforementioned computer-animation titan. 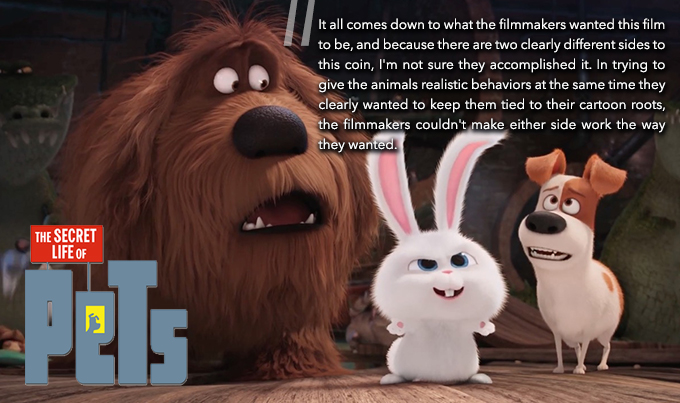 Max (voiced by Louis C.K.) is a sweet little dog with a lovely owner, Katie (Ellie Kemper). They get along real well and love each other as pet and pet owner do. Every day when she leaves for work, Max stays put by the door until she returns. It’s a routine he’s become accustomed to, so when Katie comes home one day with a new, very large roommate, Duke (Eric Stonestreet), things don’t go over so well. Duke is a little pushy and overbearing, and seems to do everything he can to anger and bully Max. On the surface, it’s a pretty cliche alpha-dog scenario, but it still works for the dynamics the film is trying to set up, at least until they reveal how Duke got to be there in the first place, which creates a discrepancy in his behavior that’s never truly ironed out. His backstory doesn’t lend itself to him being the type of dog he’s made out to be at the beginning, which makes the building of his and Max’s relationship a bit lackluster.

What about the plot, you ask? From what I can recall, the trailers never truly captured any real plot, focusing more on the routine nature of the pets and their shenanigans at home when their owners are off at work. That was no doubt the appeal of the film and what the studio figured would get kids into the seats. And it’s no real wonder why they left out the simple plot, as it borrows (as in, follows almost perfectly) from the much better Toy Story.

Let’s give this a whirl. A new addition to an established relationship causes a rift between the new and the old, an antagonistic relationship that causes the two main characters to get lost in the city, having to find their way back home before their owner misses them. There are differences in how the events play out between the films, but where Pets falters is in how they never build any sort of authentic chemistry between any of the characters to give you something to root as they find a way to work together and bond during their adventure.

Another thing Pets doesn’t seem to get right is in the way they handle the believability aspects of what happens. Yes, this is a cartoon. That doesn’t mean your suspension of disbelief can be toyed with as extensively as it happens here. The team behind Toy Story never lost sight of the toys being toys; there were limitations to what they could and couldn’t do, keeping it very grounded in a real world nature. With Pets, when the animals are confined to the apartment, the animators do a very nice job of making them feel real. But once outside, they become caricatures of themselves, devolving into a limitless set of impossibilities (making a key out of a carrot that actually works in a real-world lock?) that turn them into just another cartoon. When Buzz has to drive a car in Toy Story 2, there’s a learning curve that shows how all of the cogs work and how it may seem possible, no matter how unusually insane. In Pets, when the animals drive a car, it feels like a Bugs Bunny cartoon gone wrong.

Where Pets takes an interesting turn is a prime example of the difference between the trailers and the actual film. It turns out, there are a rabble of disgruntled former pets who now live in the sewers plotting to take over the world, all run by a wild-eyed, sadistic bunny named Snowball (Kevin Hart). But even this fun little excursion doesn’t do much to help the script, which just feels a bit like a round robin writing session, wherein one writer would write a few pages, then a second writer would add onto it, and then a third and so on until they had 90 pages. Toy Story comparisons aside, the overall story is good, it’s just not great, failing to deliver much emotional punch, not to mention a strong dose of fall-off-your-chair laughs.

For all of its faults, though, Pets still comes away as a fun little getaway, mostly because of Gidget (Jenny Slate), the cute little dog who has a major not-so-secret crush on Max. She becomes the heart of the movie and stands out above the majority of the cast (right up there with Hart, whose crazy personality fits right in and makes Snowball fun — I wanted to see much more of his antics than I did Max and Duke). It all comes down to what the filmmakers wanted this film to be, and because there are two clearly different sides to this coin, I’m not sure they accomplished it. In trying to give the animals realistic behaviors at the same time they clearly wanted to keep them tied to their cartoon roots, the filmmakers couldn’t make either side work the way they wanted. Pets is cute and whimsical; that’s what it has going for it. But if Illumination Entertainment wants to achieve greatness beyond their minions, they’re going to have to start innovating on their own and allowing their cute little puppies to become strong, healthy pure-breeds.

Next week, new movies include Ghostbusters and The Infiltrator. If you would like to see a review for one of these, or any other film out next week, please respond in the comments below.

This entry was posted on July 11, 2016, 6:40 pm and is filed under Entertainment, Film, Movies, Reviews. You can follow any responses to this entry through RSS 2.0. You can leave a response, or trackback from your own site.