Krampus is one odd little duck. Coming out of the theater, I wasn’t quite sure what to make of it. Was it supposed to be a “run/hide from the demon” style horror film or a goofy, Gremlins-esque horror romp? Given the cast, which includes straight-man Adam Scott, award magnet Toni Collette, funnyman David Koechner and snark-master Conchata Ferrell, it could have gone either way. But with such a roller coaster of tones running through the film, I couldn’t lock down whether it worked well or was a complete mess. After a few days of assessment, I’ve come to the conclusion that Krampus is a film that might have gained a cult status… had it gone more in the direction of Gremlins mayhem than the standard dysfunctional family gets attacked bedlam. 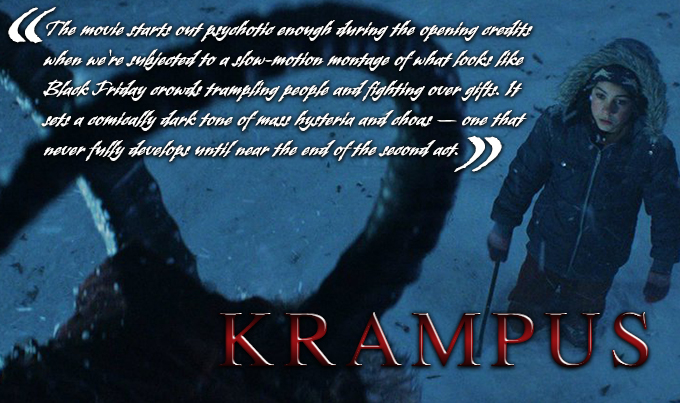 Scott plays Tom, the patriarch of a family who has lost their sense of tradition. His wife, Sarah (Collette), doesn’t seem to have time to spend with their son Max (Emjay Anthony) as she always does a few days before Christmas (which causes Max to act out), and their daughter, Beth (Stefania LaVie Owen), doesn’t care about anything but her boyfriend. The only person who still believes wholeheartedly in Christmas, its traditions and meaning, is Tom’s mother, Omi (Krista Stadler).

Losing faith in the season is the crux of the film’s plot, so when Sarah’s sister, Linda (Allison Tolman), and her family (including husband Howard (Koechner), their four kids — who aren’t worth talking about in detail, as they are nothing more than fodder to kill off so the filmmakers don’t have to kill the cast that matters — and Sarah and Linda’s Aunt Dorothy (Ferrell)) arrive to spend Christmas, Max grows even more distant. In one key scene, one of Linda’s daughters taunts Max by reading his recent letter to Santa — a poignant letter wherein everything he asks for is unselfishly real. This moment of realization that things will never be the same as they used to be leads to Max ripping up his letter and sending it to drift into the wind. Enter Santa’s evil shadow, Krampus (voiced by Gideon Emery), who comes to remove all of the non-believers from the world.

The movie starts out psychotic enough during the opening credits when we’re subjected to a slow-motion montage of what looks like Black Friday crowds trampling people and fighting over gifts. It sets a comically dark tone of mass hysteria and choas — one that never fully develops until near the end of the second act. Which is disheartening because if they would have managed to utilize that tone throughout, the film would have had better legs to stand on. Instead, it devolves into a slow-moving family drama for the next hour, killing time before finally getting to the good stuff.

Even though he tries to build a sense of captivating tension, director Michael Dougherty leaves us to wallow in the tedious snow-drift waiting for something to happen. The snowman that appears out of nowhere after a blackout wipes out the entire city? None of that gives us any real sense of danger, as not much ever comes of it (except for the fact that in the dark, with no heat, comes the hand of icy cold). The bag of Christmas gifts that show up on the doorstep with no explanation? No one ever notices it, or makes much of a fuss about it, which reduces the power of the payoff when that bag of gifts finally comes into play. Beth heading out into the snowstorm to check on her boyfriend? Though there’s one taut scene that Owen plays well, the entire idea is a little wasted (especially because Beth bites it so early). Tom and Howard go out looking for her, but for what purpose? To find a truck they will never use? To nearly get eaten by a snake-like something in the snow? The entire thing is virtually useless and leads into about a half-hour where the pace stalls, almost as if Dougherty had an idea, had a cool final act, but was unclear of how to get to that final act.

But what a final act. Just as I was about to write the movie off as a boring failure, Dougherty kicks it into high gear and throws the kitchen sink at you without remorse. One of the best things to come out of this movie is Dougherty’s decision to buck the trend of using digital effects to tell the story and utilize an effective mix of practical effects, animatronics and CG to give the film a retro feel while keeping it current and up-to-date — a manic, old-school B-movie that plays like an 80s horror flick that’s so bad it’s good. When you see the scene with the nail gun-toting gingerbread men, you’ll wonder where all of this had been in the first two-thirds of the film.

All of it leads to a finale that spins your head around with its roller coaster of changes, from a masterful twist that devolves into a cliché ending, which then reverts back to another shocking twist all in the space of about five minutes. There’s certainly a love-hate relationship with Krampus, and though I wish Dougherty had gone all-in on the schlock, I thought the adult cast worked really well together (playing off of each other the way a real family who doesn’t get along might) to at the very least, hold the film together enough until we could finally unwrap the gift taunting us from underneath the tree.

Next week, new movies include In the Heart of the Sea. If you would like to see a review of this, or any other film out next week, please respond in the comments below.

This entry was posted on December 8, 2015, 11:38 am and is filed under Entertainment, Film, Movies, Reviews. You can follow any responses to this entry through RSS 2.0. You can leave a response, or trackback from your own site.