From what I can tell, whenever Jack Black does a kids movie, it can go one of two ways:

1. It rocks! As in the School of Rock, which was one of those films that takes you by surprise by how good it is; or

2. It’s too big for its britches. As in Gulliver’s Travels, which was a huge disappointment to say the least (but, then, not all that surprising in hindsight).

When I first saw the trailer for Black’s newest kiddie adventure, Goosebumps, it didn’t impress me all that much, but neither did the trailer for School of Rock. Let’s just say, I was really hoping the film would rise above the so-so trailer and prove itself to be monster fun, but was afraid it would crash and burn in a pile of melted goose flesh. It turns out to be somewhere in between — not great, but fun nonetheless. 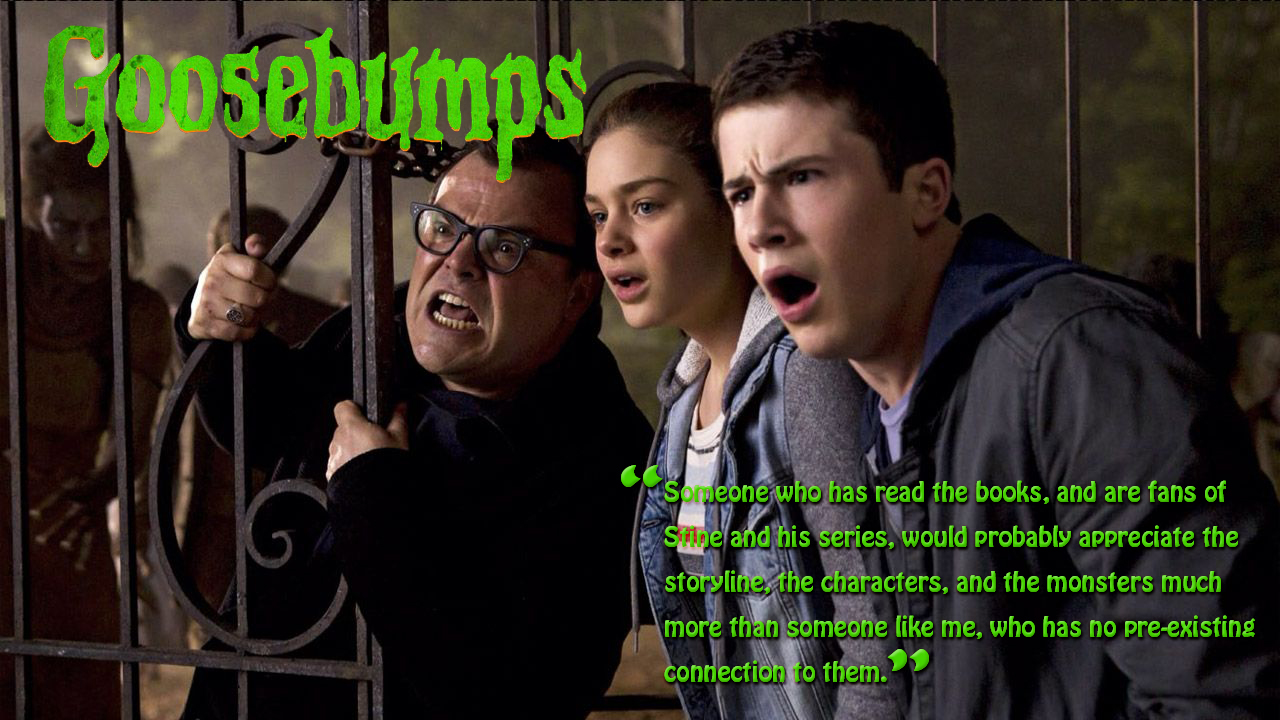 Black plays reclusive R.L. Stine, author of the popular Goosebumps book series from which the movie is based. Stine despises everyone except for his sixteen-year-old daughter, Hannah (Odeya Rush), whom he essentially keeps locked away in their house and away from any real interaction from other kids her age. Only when Zach (Dylan Minnette) moves with his mom (Amy Ryan) to the small town of Delaware for a fresh start after the death of his father does Stine’s complacent world erupt into utter chaos. You see, in typical movie fashion, Zach immediately takes a liking to Hannah, who peaks his interest even more when she sneaks away with him to an abandoned fair in the woods nearby.

After Stine catches Hannah cavorting with Zach, he’s clearly upset, and it appears to Zach through shadowed arguments, that Hannah is being abused. Upon breaking into her home to find out, we learn Stine’s crazy fun secret — the characters that Stine writes have the ability to literally jump from the pages of his story. It seems Stine was bullied when he was younger and was able to channel all of his anger and loneliness into writing his own friends, monsters that would eventually become real and occasionally wreak havoc. The only way to control his imaginative creations is to keep them locked up tight in their original manuscripts. Zach doesn’t know this and unlocks a couple of the manuscripts, one of which releases a psychotic ventriloquist du– er, um… oh, what the heck. A dummy — Okay. I said it. It was a ventriloquist DUMMY! His name is Slappy (voiced deliciously by Black), and because he’s tired of living his life on a shelf decides it’s time to release all of Stine’s creations and burn the books in their wake so that there’s no chance he can capture them again.

Black also voices the Invisible Boy (who oddly doesn’t get much screen time), and with all three characters, Black is clearly having a great time. With Stine, he’s able to level his natural insanity with a dose of Xanax that keeps him controlled but allows him to retain the Jack Black flavor that shows up in a more boisterous turn as Slappy. Not only that, but he respectfully steps back to play second fiddle to his younger costars, no more so than with Rush, who has a charm about her that glows bright with the simplest of smiles. She’s cute, innocent and holds your attention no matter who she’s on screen with. Hannah also has one of the more unique twists of the movie, one that really isn’t explored as much as it could have been, leading to a climax that doesn’t quite resonate as much as it should have.

The character I haven’t said much about, but who does a good job balancing the scares with a light, fluffy attitude, is Ryan Lee as Champ, who becomes the epitome for the main issue I had with the film. There’s a lot going on, but none of it ever seems to fully flesh itself out. It’s like eating an entire bag of marshmallows — sweet and tasty, but not a whole lot of nutritional value. You’ll no doubt have fun watching the characters look for answers to how to stop the monster menace, but there’s no real resonance with any of the character arcs. Champ, for example, is in love with a fellow student who’s dating a jock. The payoff for the arc does work on a substantial level, but with just a few lines of dialogue and maybe one extra scene, the conclusion to this subplot would have given us so much more to care about in the moment.

But you don’t go to a Goosebumps movie for the characters. You go for the monsters. I have to admit, I have never read a Goosebumps book, so part of my lack of enjoyment with the movie may stem from not knowing who these monsters are and what they do in the actual stories. Someone who has read the books, and are fans of Stine and his series, would probably appreciate the storyline, the characters, and the monsters much more than someone like me, who has no pre-existing connection to them. Then again, is that not where the film falters the most? It’s great to see a movie like this pay homage to the source material in the way it does to give its fans what they expect. However, the filmmakers must be careful not to alienate non-fans, making sure to create a world of characters we can enjoy as first time readers and viewers. They do accomplish this pretty well at the beginning, as Champ talks about having read the books and what they meant to him as a kid. But it doesn’t go far enough. What needs to be considered is how do we connect the monsters we see in the movie to what they did in the books, and does that even make a difference to the enjoyment of the film?

Case in point is Slappy. Through several subtle clues, we know there’s some sort of history between the dummy and Stine, and what Slappy may have done in the story he originated from, but there isn’t enough context to understand what his abilities are (as it appears he can disappear and reappear at whim…) and why he was created in the first place. It’s a little bit of backstory that could have gone a long way in developing this character and his relationship with Stine. This would have given Stine and his monsters — who are all well done in relation to the animation aspects (especially the giant praying mantis), but still seem to make the film feel too fake for its own good — much better character development, helping connect Stine to his daughter on a much deeper level and sprinkle that extra magic that keeps Goosebumps from chilling you with laughs and heart.

Next week, new movies include The Last Witch Hunter, Jem and the Holograms and Rock the Kasbah. If you would like to see a review of one of these, or any other film out next week, please respond in the comments below.

This entry was posted on October 20, 2015, 11:23 pm and is filed under Entertainment, Film, Movies, Reviews. You can follow any responses to this entry through RSS 2.0. You can leave a response, or trackback from your own site.