Movie Mayhem – Inside Out

Posted by Bryan Caron in Entertainment, Film, Reviews on June 27, 2015

Ever since Pixar exploded onto the scene with their game-changing animated behemoth, Toy Story, there’s one thing they have never strayed from — their integrity. It doesn’t matter whether or not audiences are blown away by their stories or are indifferent to them, John Lasseter and his team will defend their product without a second thought. The best example of this integrity was in their decision to delay The Good Dinosaur because they knew it wasn’t ready. Instead of releasing an inferior product, one they couldn’t get fully behind, they pulled it from its release date even though it caused some pundits to claim that Pixar’s magic was starting to fizzle. I’d much rather they take their time and be extremely happy with the final product than to have them shove something into the marketplace simply because that was the plan. It’s because of this integrity (as well as not shying away from the darker, more adult themes that leave grown men crying) that has kept them creatively astute. No matter what you may have thought of something like Cars 2, you can always rest assured there will always be a film like Inside Out just waiting in the wings to prove why Pixar continues to be the reigning champ for high quality entertainment that doesn’t condescend to its audience. END_OF_DOCUMENT_TOKEN_TO_BE_REPLACED 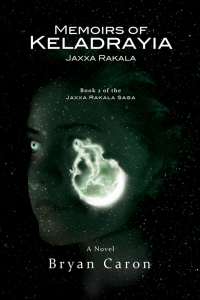 Book 2 in the riveting Jaxxa Rakala Saga (check out book 1) takes you on an emotional ride of self-discovery, as all of your favorite characters look deep within themselves to discover who they truly are while continuing their quest to find answers about Stacey’s abduction. END_OF_DOCUMENT_TOKEN_TO_BE_REPLACED

Posted by Bryan Caron in Entertainment, Film, Reviews on June 19, 2015

“Yeah, but John, when the Pirates of the Caribbean breaks down, the pirates don’t eat the tourists.” — Dr. Ian Malcolm (Jeff Goldblum), Jurassic Park

Those words come to full, glorious life in Jurassic World when a flurry of liberated pteranodons dive-bomb the patrons of the now open dinosaur theme park after they’ve all been corralled to the “main street” of the park because the new attraction decided to outsmart its human captors and run amok across Isla Nublar, the island where John Hammond originally established his original Jurassic park. And like the hundreds of guests who ooh and aah the exhibits before becoming lunch, I was engrossed by everything director Colin Trevorrow had to offer in representing Ian Malcolm’s eloquent warnings. END_OF_DOCUMENT_TOKEN_TO_BE_REPLACED

This past weekend, I attended the Temecula Independent Film Festival in the Temecula Valley wine country, and I am honored to have received the Best Grape Dance Feature award for my feature film, Secrets of the Desert Nymph. The grape dance award was given to the best films from filmmakers who live in the Inland Empire (which includes Temecula, Murrita and Riverside areas). END_OF_DOCUMENT_TOKEN_TO_BE_REPLACED

Posted by Bryan Caron in Entertainment, Film, Reviews on June 12, 2015

When it comes to music, the Beach Boys are one group that transcends the art form. The harmonies blended perfectly with the way the group mixed their music, creating a unique sound that made you feel as if you were out on the beach enjoying the warm sun and breezy ocean air no matter where you might be (and it never matter that they weren’t actually surfers). There is no doubt there was genius behind their creativity, and like a lot of creative geniuses, Beach Boys front man, Brian Wilson, tapped into a suppressed darkness to find the magic of his artistry (along with a little bit of drug use here and there — it was the sixties after all). Director Bill Pohlad examines this well of madness in the biopic, Love & Mercy, but in staying true to his subject, turns the formula on its head to not only explore his fall into psychosis, but his rebirth from it, interlinking them with the same tenderness the Beach Boys delivered to their fans. END_OF_DOCUMENT_TOKEN_TO_BE_REPLACED

Before my new novel officially lands on June 23, you now have the chance to check out the first two chapters, which are ready to be devoured as part of the brand new Phoenix Moirai Publising site, which itself dives head first into what makes publishing with Phoenix Moirai so unique (or at least what will make it unique, once it’s fully operational in, say, ten or so years *cross fingers*; I know, it’s a long time to wait, but I’m still building the business, here, so be patient!) END_OF_DOCUMENT_TOKEN_TO_BE_REPLACED

Posted by Bryan Caron in Entertainment, Film, Reviews on June 5, 2015

The majority of disaster movies are a lot like your favorite processed snack food — consuming too much of them may be bad for your health, but you consume them anyway because they’re just so darn enjoyable. And like any good comfort food, similar ingredients across all different types make them rich with delightful gratification. So it is with San Andreas, which doesn’t deviate at all from the tried-and-true, genre-specific formula that has made disaster movies of the past so successful. Let’s break it down point-for-point and see how it all shakes out. END_OF_DOCUMENT_TOKEN_TO_BE_REPLACED

Posted by Bryan Caron in Miscellaneous Stuff on June 5, 2015

You might be a writer if… you wake up angry because your dreams were full of plot holes. 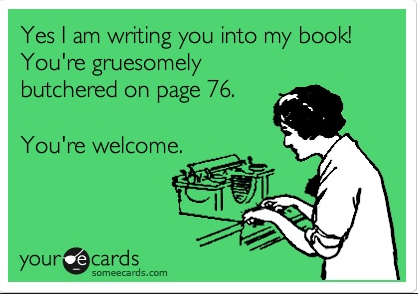 A lot of “stuff” has been going on in my life lately. Hard stuff. Heavy stuff. The kind of stuff that just makes me want to write massacre scenes….except I am so brain dead I had to google how to spell “massacre.”

WHAT AM I DOING???? *breaks down sobbing*

I am supposed to be an an okay, maybe  Fine, I give up! I have nothing left to saaaaayyyyyy. I am all out of woooords *builds pillow fort*.

I figured it’s time for a bit of levity. Heck, I need a good laugh. How about you guys?

We writers are different *eye twitches* for sure, but the world would be SO boring without us. Am I the only person who watches Discovery ID and critiques the killers?

You are putting the body THERE? Do you just WANT to go to prison? Why did you STAB…